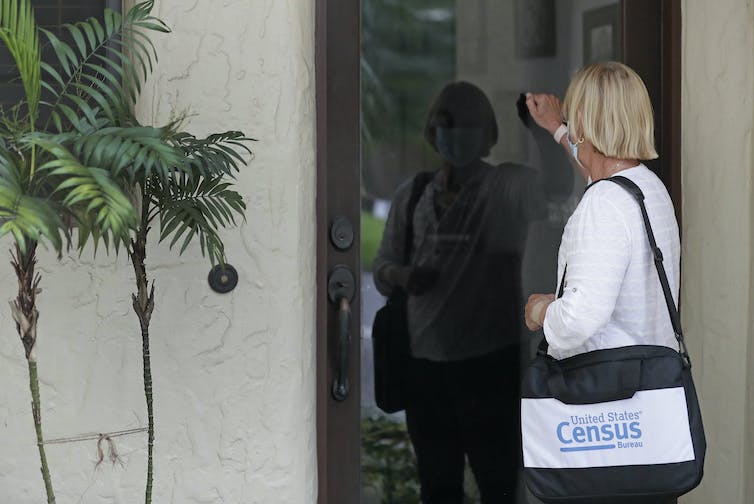 Census takers went door to door in 2020, as in past years, seeking to make the count as accurate as possible. AP Photo/John Raoux

After every census, the U.S. Census Bureau reports how well it did at counting every person in the country. In 2020, as in past years, the census didn’t get a completely accurate count, according to the bureau’s own reporting. The official census number reported more non-Hispanic whites and people of Asian backgrounds in the U.S. than there actually were. And it reported too few Blacks, Hispanics and Native Americans who live on reservations.

The Conversation U.S. asked Aggie Yellow Horse, a sociologist and demographer at Arizona State University, to explain why, and how, the census misses people, and how it’s possible to assess who wasn’t counted._ 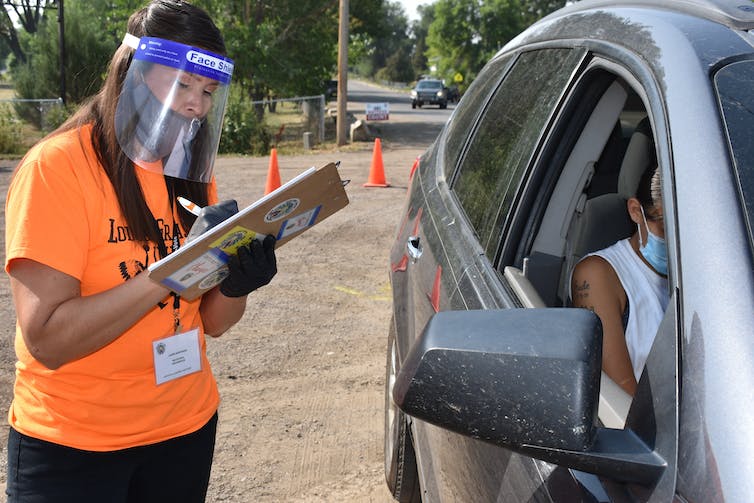 Census workers found their time and ability to connect with people limited by the pandemic. AP Photo/Matthew Brown

1. Who gets missed in the census?

The people most commonly missed are those with low income, people who rent or don’t have homes at all, people who live in rural areas and people who don’t speak or read English well. Often, these are people of color – Black Americans; Indigenous peoples; or people of Hispanic, Asian or Pacific Islander backgrounds.

Because of their living situations, these people can be hard for census takers to track down in the first place. And they may be more reluctant to participate because of concerns about confidentiality, fear of repercussions and distrust of government.

Nevertheless, the U.S. Census Bureau tries to count everyone, aiming targeted public relations campaigns at specific communities to encourage members to participate. In addition, Census Bureau employees knock on doors in person across the country, trying to follow up with those who did not respond to mailings, announcements and events.

However, the pandemic made that process more difficult for the 2020 census, both by making people uncomfortable with in-person visits and by shortening the timeline for collecting the data.

This performance is much worse than in the previous two censuses, when smaller proportions of those populations were missed.

The 2020 census also counted 1.64% more non-Hispanic whites than there actually are in the country. For example, college students could have been counted twice – at their college residence and at their parents’ home.

3. How can they count the people who were missed?

It can be puzzling to understand how the Census Bureau can know how many people it missed. Efforts for measuring census accuracy started in 1940. Census officials use two methods.

As a second measure, the Census Bureau runs what it calls a “post-enumeration survey,” taken after the initial census data is collected. The survey is conducted independent of the census and randomly sent to a small group of households from census blocks in each state, the District of Columbia and Puerto Rico. The results of that survey are compared with the census results for those households and can reveal how many people were missed, or if some people were counted twice or counted in the wrong place. 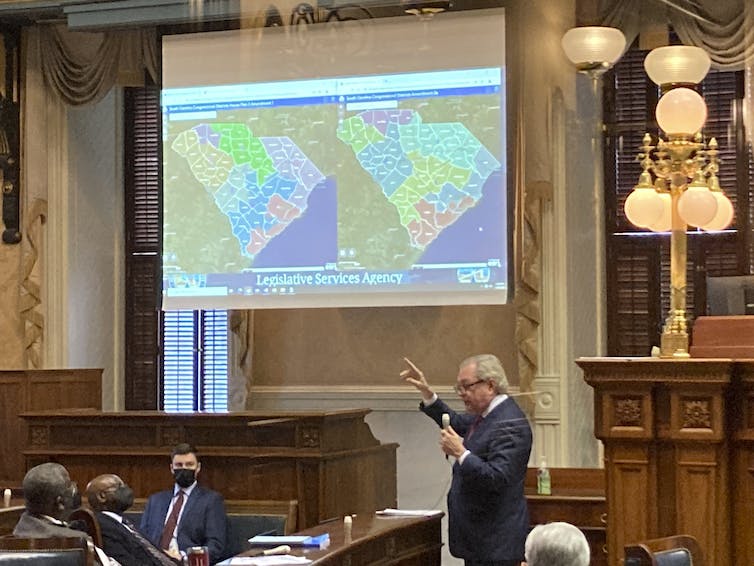 Population figures formally reported by the Census Bureau for the purposes of reapportionment cannot be corrected, according to a 1999 Supreme Court ruling. AP Photo/Jeffrey Collins

4. Can the Census Bureau fix its data?

The Census Bureau has determined that its 2020 data is not accurate and has measured the amount of that inaccuracy. But in 1999, the Supreme Court ruled that the bureau cannot adjust the numbers it sent to Congress and the states for the purpose of allocating seats in the U.S. House of Representatives and, therefore, Electoral College votes. That’s because federal law bars the use of statistical sampling in apportionment decisions and requires those changes to be made only on the basis of how many people were actually counted. That means political representation in Congress may not accurately reflect the constituencies the representatives serve.

But the numbers can be adjusted when used to divide up federal funding for essential services in communities around the nation. More than US$675 billion a year is provided to tribal, state and local governments proportionally according to their population numbers.

However, that adjustment happens only if tribal, state or local officials ask for it. The Census Bureau’s Count Question Resolution program can correct 2020 census data until June 2023. After the 2010 census, the program received requests from 1,180 governments, of out about 39,000 nationwide. As a result, about 2,700 people were newly added to the census count, and about 48,000 household addresses were corrected.

This approach can lessen the harm done to communities where the census count missed people. But it doesn’t prevent the Census Bureau from missing them – or others – in the next census.

[Get the best of The Conversation, every weekend. Sign up for our weekly newsletter.]

This article is republished from The Conversation under a Creative Commons license. Read the original article.