A Lot Has Changed Since The Atlanta Spa Shootings. A Lot Has Not. 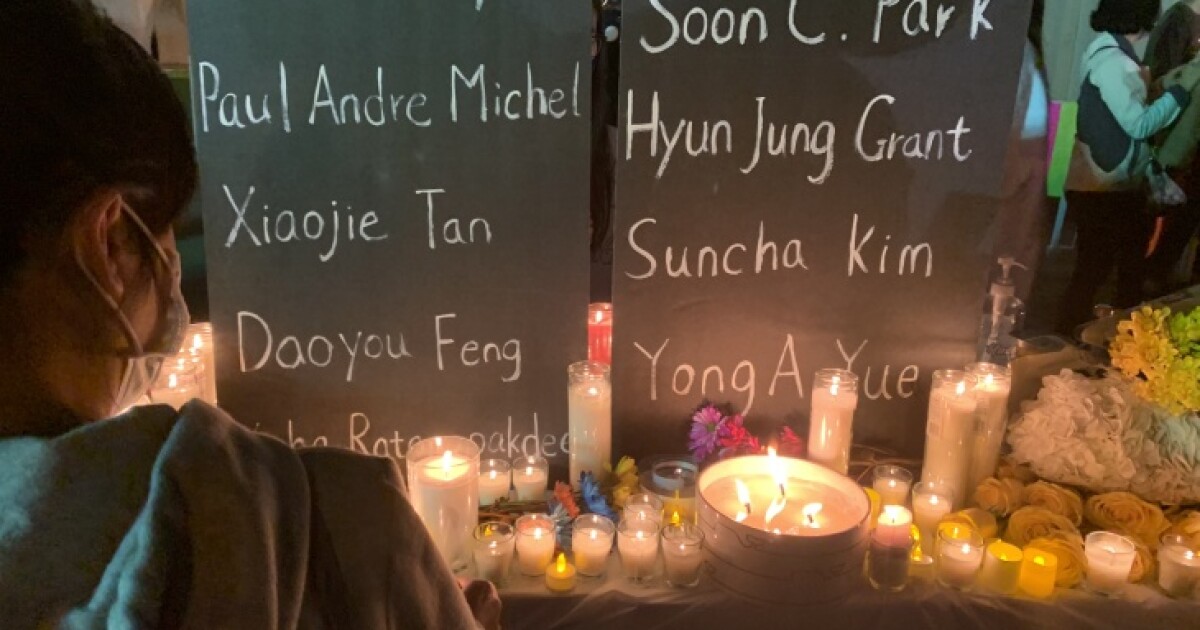 Start your day with LAist

Eight minutes of silence — one minute for each of the victims killed in the Atlanta spa shootings.

In Los Angeles, that’s how a coalition of Asian American community organizations on Wednesday observed the one-year anniversary of the massacre at three massage businesses in and around Atlanta. Of the eight people killed, six of them were women of Asian descent.

Organizers had been planning a remembrance event in Koreatown up until last week, when they learned from advocates in Atlanta that the victims’ families had called instead for a day of quiet reflection on one of the darkest moments in Asian American history.

What Has Changed Since Atlanta?

Certainly, the violence has not stopped. In Los Angeles, hate crimes against Asians were up last year by 173%. Recent months have seen four Asian New Yorkers die after being attacked.

The continued violence does not surprise Connie Chung Joe, executive director of Asian Americans Advancing Justice-LA, one of the groups observing Wednesday’s eight minutes of silence.

She said the racist rhetoric of former President Trump helped to catalyze anti-Asian sentiment, but that the antagonism runs deep in this country.

When the Atlanta shootings happened, just three days after she had helped put on an anti-Asian hate rally that drew hundreds to Little Tokyo, Di Barbadillo said she almost expected it.

“My first reaction — it’s sad actually — was ‘I’m not surprised’,” said Barbadillo, a community organizer. “It just felt like with this recent wave of anti-Asian violence that something big was almost bound to happen.”

Standing at the intersection of xenophobia, racism and misogny is nothing new for Asian Americans. But Joe said the scope of the tragedy, perpetrated by a gunman who targeted Asian-run businesses and blamed his actions on sexual addiction, opened a lot of people’s eyes.

“We saw a huge influx of media interest, public interest in how to show solidarity and wanting to know what’s happening, as well as funding coming in from corporations and individuals,” she said.

Atlanta “empowered the [Asian American Pacific Islander] community to really come out on the streets demanding justice, demanding equity and asking for assistance from the stakeholders,” said Steve Kang, director of external affairs at the Koreatown Youth and Community Center.

In Little Saigon, seniors are learning self defense from MMA fighters outside the iconic Asian Garden Mall.

“We’re not trying to turn you into cage fighters. We just want you to be safe.” pic.twitter.com/31qn9dobUL

Community organizer Barbadilloworried that because some of the perpetrators of anti-Asian attacks were also people of color, the violence would ramp up racial tensions.

After Atlanta, she tried to stress the commonalities between races, and took part in an online discussion about Asian and Black solidarity.

“We’re not just trying to highlight anti-Asian violence, but trying to not let this particular wave of violence act as a wedge between people who are also fighting their own fight,” Barbadillo said.

While she can work to build bridges to other groups, Barbadillo said she honestly doesn’t know how to stop the violence. If history is any guide, the attacks will eventually ebb and racism will ostensibly become less severe, only to show itself again later.