Asian Americans Ask How to End the Hate 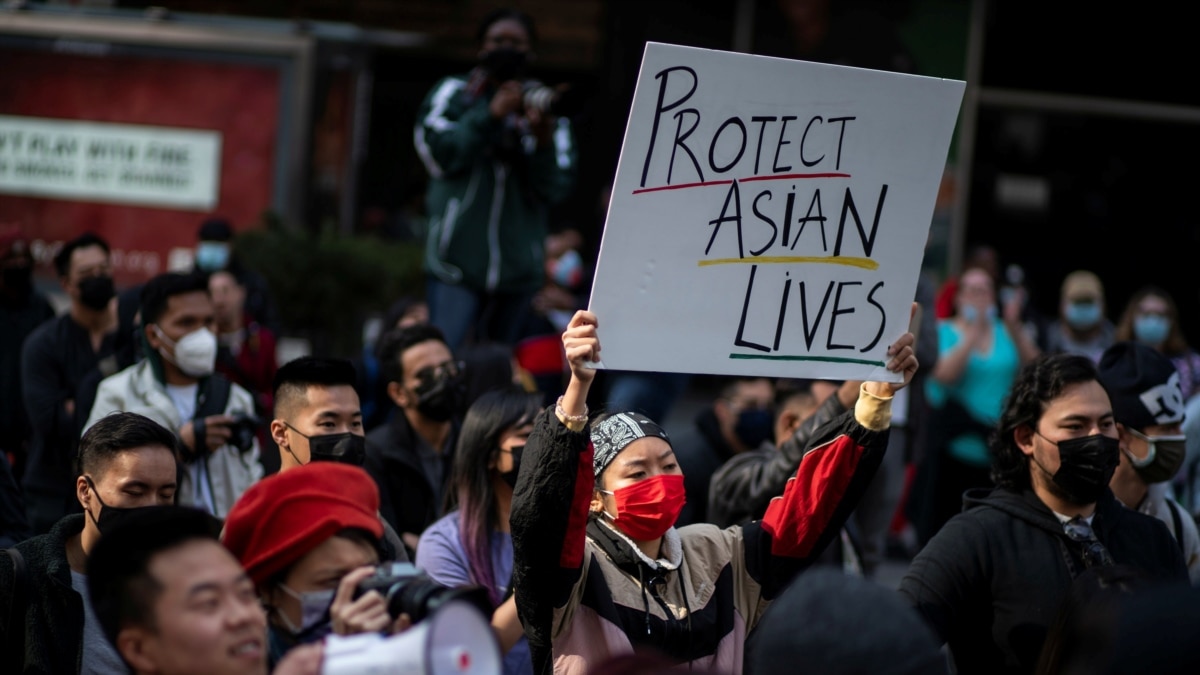 Another surge in hate crimes and incidents aimed at Asian Americans, ranging from verbal harassment to violent assaults, has that community searching for ways to stop it.

Among the victims, Michelle Go, 40, was pushed onto the tracks of the New York subway January 15 in an unprovoked deadly attack. A senior manager at a financial consultancy, Go was a Chinese American who had volunteered to help the homeless.

While many assaults have been captured on video, others go unnoticed. A Chinese immigrant named Michelle, who asked that her full name not be used, was also the target of an unprovoked attack in an upscale neighborhood in Long Beach, California. The event was not recorded and received no news coverage, but it left an indelible mark on Michelle.

On May 2, 2021, “a beautiful morning,” Michelle recalls, she went for her daily walk. A small woman in her early 50s, she passed a Sunday farmers market, busy restaurants and yachts moored in the harbor. She doesn’t remember what happened next, but a bystander who helped her has a clear recollection.

Max Wilson, a student and athlete at San Diego State University, was walking near the water with his father.

“A small Asian woman was just minding her business, walking past a man,” Wilson, 20, recalls. “All of a sudden, we saw him turn around, and he starts punching the back of this poor Asian woman’s head and repeatedly bashing it.” Wilson says he and his father “couldn’t believe their eyes.”

On regaining consciousness, Michelle found herself, bleeding and in shock, on the ground, being helped by bystanders. She later learned she had suffered a concussion — along with injuries to her shoulder, teeth and mouth — and had bruises and cuts from head to ankle.

Wilson followed the man, who grabbed a heavy wooden board from a dumpster and swung it repeatedly, attacking the young man and smashing it against a car, but Wilson overpowered him.

Passers-by found ice for Michelle’s injuries and called an ambulance. Police arrived quickly. Wilson pointed to the man’s hiding place under a dock, and he was arrested.

“There was absolutely no reason for him to target this tiny woman,” Wilson recalls.

Michelle has mostly recovered but is “afraid of going out (and is) extremely vigilant,” she said. She suffers from nightmares, headaches and chronic shoulder pain.

Police and prosecutors have charged the man with assault.

“I have to think it was racially motivated,” Michelle says. She did not know her attacker, she had done nothing to offend him, and non-Asians on the scene were unmolested, she says. Robbery wasn’t a motive because he took none of her belongings.

Attacks such as Michelle’s are on the rise, according to U.S. Department of Justice statistics. In 2020, hate crimes against Asian Americans were up, with 279 recorded incidents versus 158 the previous year.

Not the full story

Manjusha Kulkarni of the organization Stop AAPI (Asian American Pacific Islander) Hate notes that “not all law enforcement entities collect the data. They don’t all report it to the FBI.” 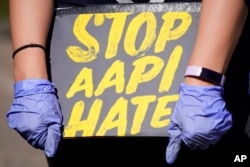 FILE – A woman holds a sign and attends a orgrally to support stop AAPI (Asian Americans and Pacific Islanders) hate at the Logan Square Monument in Chicago, March 20, 2021.

Kulkarni says language barriers keep some immigrants from reporting crimes. Others, without legal status to stay in the country, fear immigration authorities.

Kulkarni, whose organization tracks self-reported hate incidents, says that “90% of what is reported to us are not crimes.” Instead, they are “comments made in the workplace, at school. It can be bullying. It can be harassment,” she says, “and it can be discrimination in retail.”

From March 2020 through September 2021, her organization tracked more than 10,000 self-reported incidents and collaborated on a survey that found 1 in 5 Asian Americans and Pacific Islanders had experienced hate incidents in the past year. Whatever their background, “from Vietnamese, Filipinos, even South Asians and Pacific Islanders,” they are often targets of anti-Chinese bias, Kulkarni said.

That happened to Thai American Tanny Jiraprapasuke, who was verbally attacked aboard a Los Angeles metro train in February 2020. The young woman was subjected to a tirade against Chinese immigrants by a man who berated China as the source of COVID-19, the disease caused by the coronavirus.

It was “almost like a performance,” she recalls, with “big gestures. He was standing up, he was yelling.” It soon became clear the rant was directed at her. After 15 minutes, the man eventually disembarked, but the episode left her shaken.

Authorities can sometimes stiffen penalties by charging perpetrators with hate crimes under federal or state laws. This happened to six men in San Jose, California, in December. Prosecutors said the men had worked together in more than 170 incidents in the San Francisco region, targeting Asians for robbery, burglary or theft.

Yet even when police file assault charges in violent attacks, as in the Long Beach case, prosecutors are reluctant to file hate crime enhancements because the bar is so high, says May Lee, host of the The May Lee Show podcast and an adjunct professor at the Annenberg School for Communication and Journalism at the University of Southern California.

Federal authorities define a hate crime as a crime against a person or property motivated by an offender’s bias against a race, religion, disability, sexual orientation, ethnicity, gender or gender identity. Yet hate itself is not a crime, notes the FBI website, which says free speech needs to be protected.

Successful hate crime prosecution requires both a crime and a provable motive, and “a lot of DAs (district attorneys) don’t want to even try … because they don’t want to lose,” Lee said.

One of the brutal attacks captured on video showed an 84-year-old Chinese American man being pushed to the ground in San Francisco; the victim suffered serious injuries. Another showed two older women stabbed at a bus stop, and a third depicted the fatal attack in San Francisco of an elderly Thai immigrant. 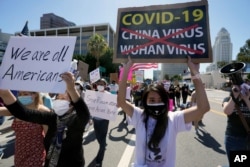 Some people say Asian Americans are viewed as easy targets. Others look elsewhere for motivation, blaming fear of COVID-19. Some accuse former U.S. President Donald Trump of inflaming hatred through his remarks that China was responsible for the coronavirus, which he called the “China virus,” “Wuhan virus” or “Kung Flu.”

At least 17 Chinese immigrants were killed in a racial massacre in Los Angeles’ Chinatown in 1871. Eight men from the mob of 500 white and Hispanic men were convicted of manslaughter, but the convictions were overturned.

Asians have also been singled out for restrictive legislation. Chinese were barred from immigration to the United States under the Chinese Exclusion Act, initially to limit competition for laboring and mining jobs. The measure passed in 1882 and was extended and in force until 1943.

Beginning the previous year, following Japan’s attack on Pearl Harbor, more than 100,000 Japanese Americans, many of them U.S. citizens, were held in internment camps during World War II.

Later, “during the Cold War,” says Jessica Lee, “the FBI targeted Chinese and Chinese American scientists and students and questioned their loyalty to the United States” amid talk of a “yellow peril.”

Kulkarni of Stop AAPI Hate says that’s happening today with the China Initiative, a Department of Justice program aimed at curbing economic espionage by China. The Trump administration launched it in November 2018, and it is still in place.

The DOJ says the initiative is aimed not at Americans but at China, which it says is connected to 60% of trade secret theft cases.

“No matter how many generations of Asian American family you trace back to,” she says, “you will always be seen as a foreigner because you’re not white.”

Kulkarni adds, “Not only are our communities viewed as bringing disease, but they’re also thought of as sly and cunning.”

“Sadly, even those who don’t subscribe directly to white supremacy still can fall victim to it in terms of their own thinking,” Kulkarni says.

Michelle, the Long Beach attack victim, says her attacker was African American and so was the young man who saved her.

Wilson, the student athlete, is mixed race, with a white father and Black mother. He has lived in Hong Kong, Taiwan and Beijing, and he and his family speak Mandarin, thanks to his father’s service as a U.S. diplomat in China.

The United States is a nation of immigrants, and its 22 million Asian Americans are a diverse group, note researchers at the Pew Research Center.

But one-third of them fear threats and physical attacks, and 80% say violence against Asian Americans is rising.

Hate incidents have Asian Americans searching for solutions, individually and through organizations.

Michelle believes Chinese Americans are scapegoats for frustration with the coronavirus and the economic problems it has brought. The hatred is misdirected, she notes, adding, “I’ve been living here for over 20 years. I’m as American as any other American.”

She is encouraged by those who came to her aid and says Americans must “create a positive culture that unites people.”

Tanny Jiraprapasuke says discussion about China and the coronavirus pandemic sparked the insults directed at her and shows “how words really matter.”

May Lee, of USC, credits social media with exposing a wide-ranging problem and creating incentive for change. She believes schools can do a better job of highlighting Asian American contributions to the American story, and notes that Illinois and New Jersey have mandated Asian American history classes in their public schools. It is a history unknown to many Americans, she adds.

Kulkarni says a national commission to discourage hatred could be modeled on local initiatives. In Los Angeles, the Human Relations Commission works to defuse racial tensions, and New York City’s Commission on Human Rights enforces human rights laws. And there are similar programs in other cities.

All say that recognizing the problem of hatred against Asian Americans and Pacific Islanders is the first step in addressing it.