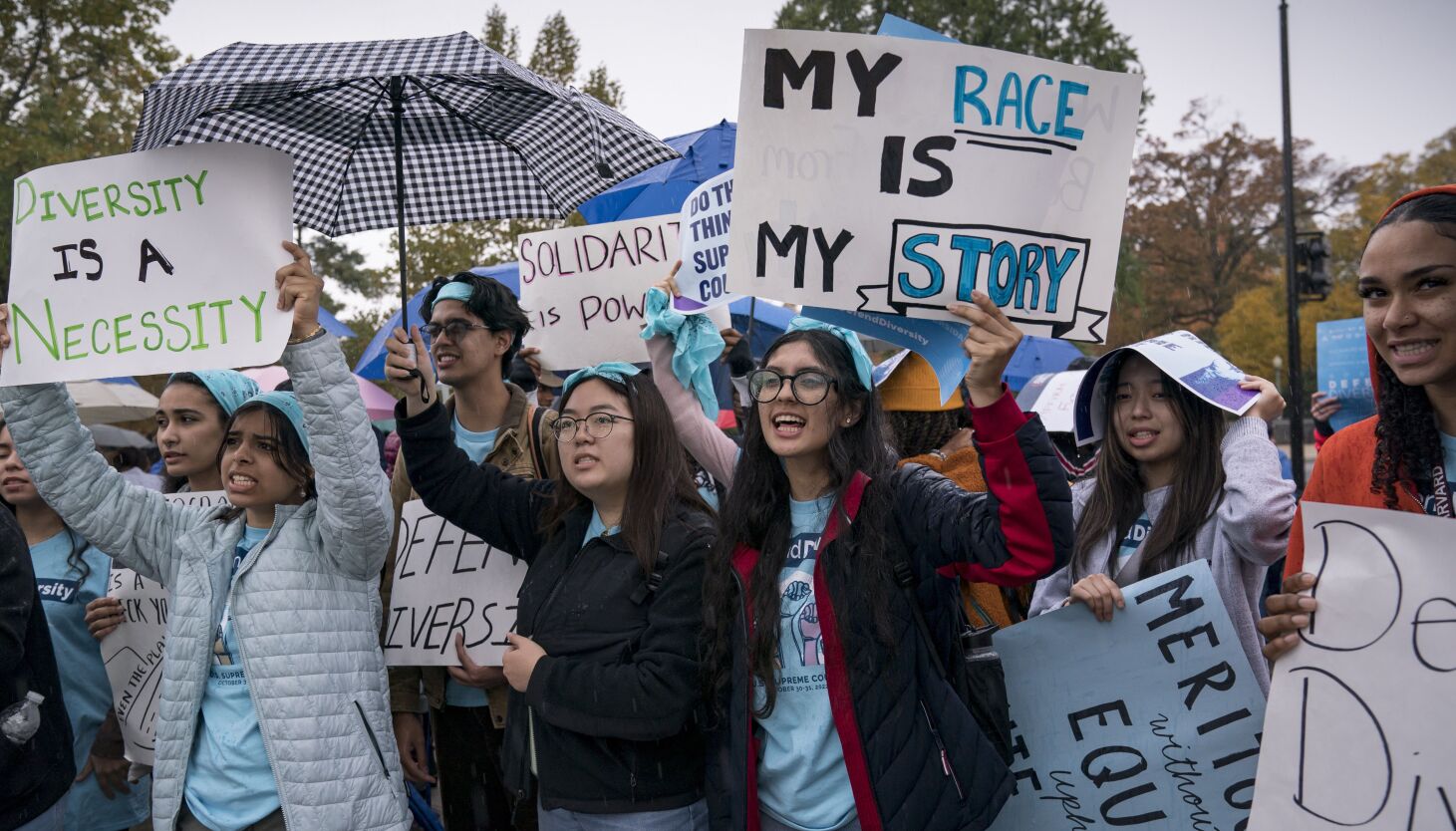 Students and activists rally outside the Supreme Court as the court before oral arguments in two cases that could decide the future of affirmative action in college admissions, Monday, Oct. 31, 2022, in Washington. | AP

None of the Gen X Indians I grew up with attended an Ivy League university for their undergraduate studies.

Many were academically gifted. They just didn’t apply. Our immigrant parents wanted to keep close tabs on us, so we just filled out college applications to local schools.

Northwestern University, along with the University of Chicago, became our gold standards for scholastic achievement. It was a flawed way of thinking since there are so many other excellent schools around, including the University of Illinois at Chicago.

My older sister was accepted to Northwestern but opted not to enroll in order to save my parents from paying the annual tuition, then around $11,000.

My brother, shocked he made the cut, ended up graduating from NU several years later. My younger sister didn’t bother applying and went to UIC.

When I attempted to join Northwestern’s Class of 1993, I got the dreaded thin envelope in the mail. I wasn’t crushed. Much smarter students in my class also received rejection letters, and I got to be a Wildcat in graduate school after following my older sister to Loyola University.

I only felt aggrieved by Northwestern when it turned down my eldest niece and unceremoniously placed my oldest nephew on its wait list.

Ayana was also rejected from her dream school on the East Coast. Zain didn’t get into the West Coast university he had his heart set on either. Both landed happily at the University of Illinois at Urbana-Champaign.

But their experiences solidified how the college admissions process can be a cutthroat roll of the dice for even the country’s top high school students, which, at the risk of sounding like a braggart aunt, my niece and nephew were.

Many young Asian Americans, including Indians, will tell you the odds are stacked against them. That’s not a stretch. A higher rate of Asian American students don’t get in to these selective colleges because there are higher proportion of Asian Americans who apply, Georgetown University’s Center on Education and the Workforce researchers found last year. Asians make up less than 6% of the overall U.S. population but represent 20% of the student body on top university campuses. We’re “overrepresented” in community colleges, too.

I can appreciate that these statistics don’t provide much comfort for teenagers who toil away in high school only to be brushed off by admissions officers. What I can’t comprehend is the Asian American contingent who’ve joined forces with the right-wing legal strategist Edward Blum to dismantle affirmative action in higher education, which would hurt prospective Black, Hispanic, Native American and many Asian students.

While overall Asian American enrollment in selective colleges would increase by a paltry 2% if only test scores are taken into consideration, 21% of the Asian Americans admitted under the holistic system would lose out, the Georgetown study showed.

Nine states, including California and Michigan, have already ended race-based colleges admissions. The rest of the country may soon be forced to follow suit based on the recent arguments presented to the majority-conservative U.S. Supreme Court in the Students for Fair Admissions’ cases against Harvard and the University of North Carolina.

A lightbulb went off in Blum’s head after his last effort to annihilate affirmative action failed when he recruited a white woman who didn’t get into the University of Texas at Austin to sue the school.

“I needed Asian plaintiffs,” Blum, a white man, said, knowing full well that many Asians Americans have been airing grievances with the college admission process for years.

They just didn’t publicly accuse Black and other Brown students of stealing their and white students’ spots at universities until Blum, who heads SFFA, came along.

Shamefully, the SFFA crowd remains silent at how legacy admissions disproportionately benefit white students to the detriment of all students of color, including Asian Americans whose predecessors rose up with others to combat systemic racism.

Ultimately, if fairness is the goal, many of us have to stop reinforcing elitism by equating acceptance into highly selective universities with talent and success, said Kevin Kumashiro, an educational policy expert and former dean of the School of Education at the University of San Francisco.

And we must keep pushing for the democratization of the system to ensure all students have access to a quality education, Kumashiro said.

There is no doubt anti-Asian bias — and biases against all people of color and other marginalized communities — can exist in the college admissions process, as it does in larger society.

Seventy one percent of the nation’s college admissions counselors are white, which raises the question why those tasked with creating diverse campuses are a homogeneous bunch themselves.

But eliminating affirmative action isn’t the answer and will only push the nation further into the abyss of “old school” racial inequity.