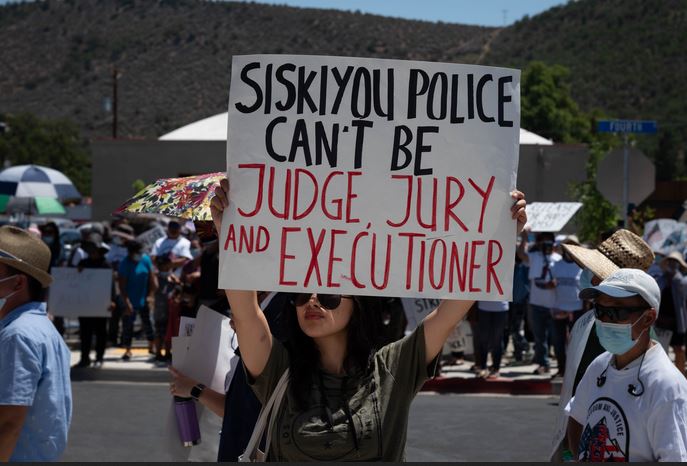 The Sacramento Bee reports the suit contends Asian Americans are harassed during traffic stops, wrongly accused of criminal activity and discriminated against in public meetings.

Residents have long accused the county of unfairly enforcing water restrictions on Asian Americans and stopping Asian Americans for traffic stops at a disproportionately higher rate.

There has also been controversy surrounding the deputy shooting death of a Hmong farmer, Soobleej Kaub Hawj. The District Attorney of Siskiyou County eventually cleared officers of wrongdoing in Hawj’s death, a decision questioned by Advancing Justice-ALC.

You can watch video of that shooting below.

“In service of this campaign, the defendants have used widespread racial profiling in traffic stops, restricted access to water making it difficult for Asian American residents to live, and placed unlawful liens to dispossess Asian Americans of their land,” the 52-page lawsuit claims, according to the Bee. “This targeting is designed to drive a disfavored racial minority from the county and has its roots in anti-Asian racism in Siskiyou dating back to the 1800s.

Larue has not yet returned calls from the Bee or NBC Bay Area for comment.

According to NBC Bay Area, a surge of Asian Americans began moving into the county in 2016.

“As we got situated here, we bought property here, we felt like we got ourselves into a discomfort zone or environment,” Thao said.

AsAmNews is incorporated in the state of California as Asian American Media, Inc and has an application for non-profit 501c3 status with the IRS pending. Check out our Instagram account. Go to ourTwitter feed and Facebook page for more content. Please consider interning, joining our staff, or submitting a story, or making afinancial contribution. We are committed to the highest ethical standards in journalism. Please report any typos or errors to info at AsAmNews dot com.