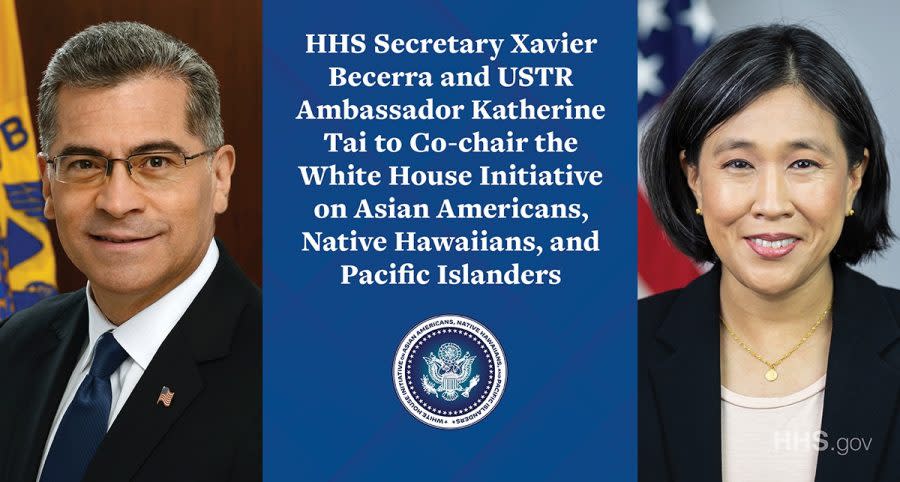 Like other communities of color, Asian Americans, Native Hawaiians, and Pacific Islanders have been disproportionately impacted by the COVID-19 pandemic. In addition to exacerbating long-standing health inequities facing AA and NHPI communities, the language of some political leaders during this public health crisis has also fueled a spike in anti-Asian bias, xenophobia, and violence. To address these inequities, the new WHIAANHPI is housed within HHS, returning this initiative to the Department where it was first launched under the Clinton Administration in 1999.

“Returning the White House Initiative on Asian Americans, Native Hawaiians, and Pacific Islanders to HHS, where it originated, represents an important step in reinvigorating this historic initiative,” said HHS Secretary Xavier Becerra. “The Biden-Harris Administration is committed to tackling a wide scope of challenges impacting communities that have been historically overlooked and underserved. I look forward to working with Ambassador Katherine Tai in leading our federal efforts to advance equity, justice, and opportunity for AA and NHPI communities across the nation.”

“I am honored to Co-Chair the White House Initiative on Asian Americans, Native Hawaiians, and Pacific Islanders (WHIAANHPI),” said Ambassador Katherine Tai, U.S. Trade Representative. “President Biden, Vice President Harris and the entire Administration are committed to creating a more equal, just, and inclusive America. Leading this initiative with Secretary Becerra will be a critical part of our work across government to expand opportunity, confront systemic barriers to success, and address the rising violence targeted at the AA and NHPI community.”

“The White House Initiative on Asian Americans, Native Hawaiians, and Pacific Islanders is the embodiment of the longstanding commitment and vision that President Biden and Vice President Harris have for our diverse and growing community,” said Deputy Assistant to the President and Asian American, Native Hawaiian, and Pacific Islander Senior Liaison Erika Moritsugu. “This Administration has delivered results for AA and NHPI communities with the President’s whole-of-government approach to equity, along with the American Rescue Plan, the Bipartisan Infrastructure Deal, and now again with the reinvigoration and expansion of this historic Initiative.”

“With today’s launch of WHIAANHPI’s Interagency Working Group and Regional Network within HHS, we now have the tools to secure resources, promote opportunities, and increase the visibility of AA and NHPI communities,” said WHIAANHPI Executive Director Krystal Ka‘ai. “I am honored to serve under the leadership of Secretary Becerra and Ambassador Tai during this pivotal time for our community as we work to build a brighter future for generations to come.”

Under the leadership of Secretary Becerra and Ambassador Tai, the newly-expanded Initiative includes an Interagency Working Group tasked with coordinating the federal government’s efforts to support AA and NHPI communities. It also includes a Regional Network comprised of federal officials in ten federal regions across the country who help to connect AA and NHPI communities with federal grants, programs, and resources.

The WHIAANHPI under the Biden-Harris Administration will focus on helping to coordinate a comprehensive federal response to the rise in acts of anti-Asian bias and violence; address the systemic lack of disaggregated data on AA and NHPI communities; expand language access and language assistance programs for AA and NHPI individuals across federal programs; address educational, health, economic, and housing disparities impacting AA and NHPI communities, and more. For more information on the White House Initiative on Asian Americans, Native Hawaiians, and Pacific Islanders, see www.hhs.gov/whiaanhpi.

Singapore Couple Attends Own Wedding via LIVESTREAM Because of Coronavirus Ban

Community and City Councilmember Come Together to Defend Boba Shop