Campus and community leaders team up for ‘CommUnity’ walk against 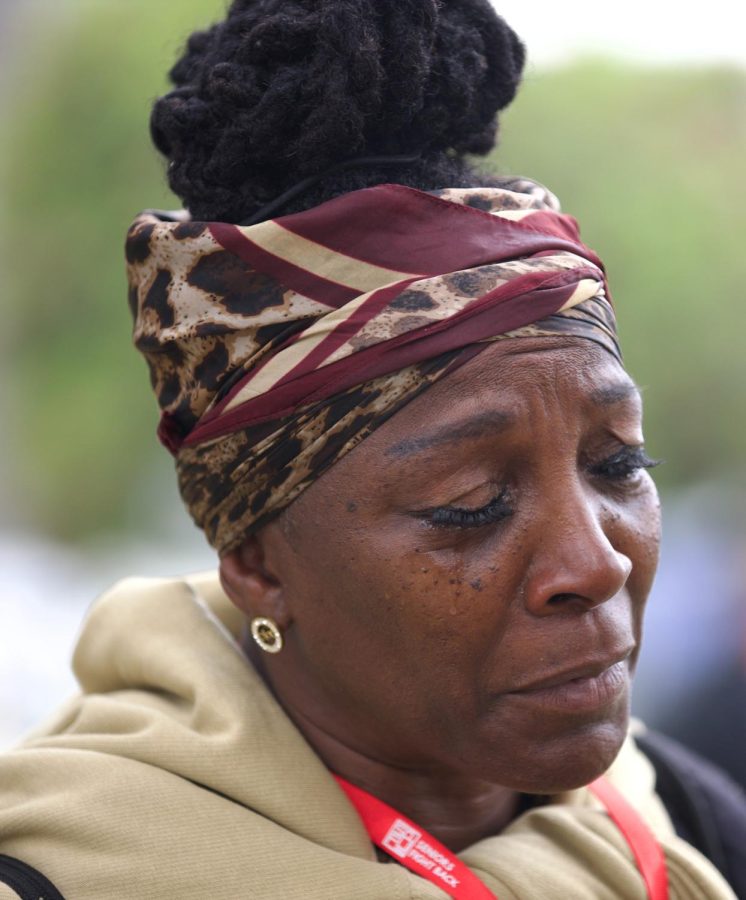 To raise awareness regarding the rise of hate crimes and incidents of racism both in and around the South Bay area, El Camino College hosted a “CommUnity Walk Against Hate” event on campus Saturday, March 26. 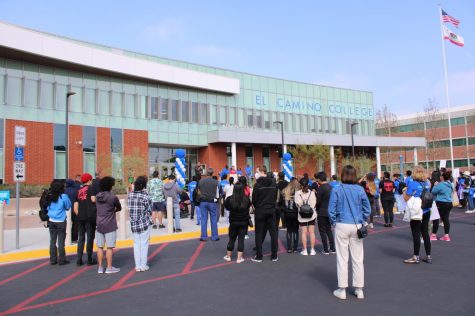 Dozens of community members, students, staff and faculty gather at El Camino College on Saturday, March 26 for a rally, community walk and self-defense workshop in response to ongoing concerns about the dramatic increase in anti-Asian hate crimes in Los Angeles and throughout the nation. In 2020, reported incidents of hate targeting Asian Americans increased 77% from the previous year in Los Angeles County, and an investigation by The Union revealed that 23% of the incidents occurred close to ECC. While 2021 data is not yet available, local and national projections are that incidents increased again in 2021. (Kim McGill | The Union)

The event’s purpose is to raise awareness regarding the recent increase in anti-Asian American and Pacific Islander hate crimes as well as provide resources for self-defense.

“I was actually the victim of a violent hate incident in August 2020,” Lee said to El Camino’s student-run publication, The Union, before the event.

Waiting to pay for her meal at a restaurant in Los Angeles, Lee was approached by a man who asked her out for dinner. Declining and citing her marriage, the stranger proceeded to verbally shout obscenities toward Lee.

“I was told to go back to Asia followed by two minutes of derogatory racist and sexist remarks and after my incident, five other victims came forward to say they were assaulted by the same man,” Lee said.

After learning that her experience was not an isolated case, Lee embarked on a journey that resulted in her and other concerned community activists forming Seniors Fight Back. 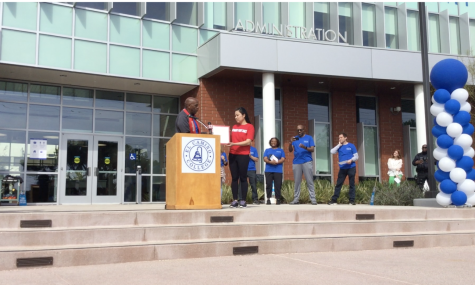 President of Seniors Fight Back Hong Lee was surprised to receive a certificate of recognition by Senator Steven Bradford on behalf of the California State Senate for her community efforts during opening remarks at the “CommUnity” walk event held on campus Saturday, March 26. Lee herself is a survivor of a hate crime that sparked her activism. (Delfino Camacho | The Union)

El Camino College Executive Director of marketing and communications Ann O’Brien reached out to Seniors Fight Back to collaborate, offering self-defense tools such as pepper spray, safety alarms and whistles as giveaways to go along with the free self-defense classes taught by co-founder and professional mixed martial arts fighter, Ron Scolesdang.

“We always wanted to have a senior self-defense component of the walk,” O’Brien said, “And our partnership with Seniors Fight Back was natural because they have done the hard work in bringing together the experts that can teach our community members how to protect themselves in unexpected situations.”

President Brenda Thames and the Board of Trustees were also in attendance at the event, joined by U.S. representative Maxine Waters and other politicians representing the county and state. Each party shared opening remarks before the walk began.

Trustee member Trisha Murakawa used her time on stage to recount an unfortunate event she experienced.

“In March of 2017 after the presidential election, my husband and I were walking our dog in our neighborhood,” Murakawa said.

During Murakwa’s walk, a neighbor’s dog ran out and immediately began attacking her dog.

Trustee Cliff Numark came up with the idea for the event after speaking with a Japanese-American friend who expressed concern over rising cultural-based violence. Numark suggested the event idea to President Thames, resulting in the “CommUnity” walk.

Congresswoman Maxine Waters continued the discussion by sharing statistics and her thoughts on why anti-Asian, anti-Pacific Islander and xenophobic crimes were on the rise.

“The number of reported hate crimes nationwide against Asian and Black people sharply increased in 2020. According to the new FBI data that was released on Monday, hate crimes targeting people of Asian descent rose by a whopping 70% last year compared with the number of such incidents in 2019,” Waters said. 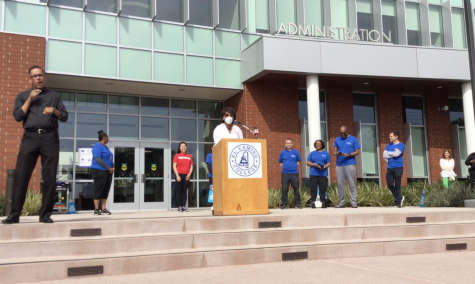 Congresswoman Maxine Waters speaks in front of the administration building during opening remarks at the El Camino College “CommUnity” Walk event held on Saturday, March 26. Sharing the makeshift stage with Waters are (from left to right) an unidentified ASL translator, Director of Public Information Kerri Web, Seniors Fight Back president Hong Lee, President Brenda Thames and the entire Board of Trustees. (Delfino Camacho | The Union)

According to the United States Department of Justice, the FBI conducted a study that saw hate crimes during 2020 increase by 44% on average throughout all major cities located in the U.S. Anti-Asian American crimes saw a 77% increase from 2019 and Anti-African American crimes continue to hold the largest demographic in the bias incident victim category.

Waters continued by citing “rhetoric” regarding the attacks on the Chinese government and its people by former President Donald Trump and his allies as a major contributor to the rise in anti-Asian American sentiment.

“You got to call it out. What we’re dealing with right now today is not new, but it’s kind of been under the rock and Trump brought it to the forefront,” Bradford said. “When the [former] United States president, the president of the free world starts spewing hatred it makes people believe that it’s okay for them to have the same sentiments and opinions.” 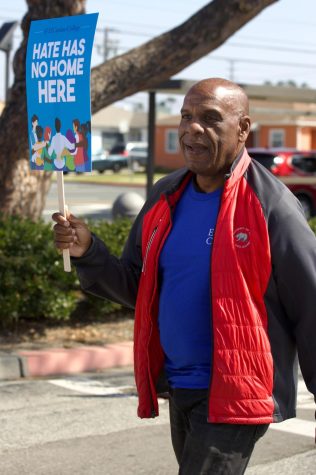 California State Senator Steven Bradford takes part in the CommUnity Walk event on March 26 at the El Camino College Campus in Torrance. Senator Bradford was one of a few prominent political figures, who also took part in the walk, which was geared to raise awareness for the increase in anti-Asian hate crimes and speech. (Greg Fontanilla | The Union)

“I stand here as chair of the Legislative Black caucus and we stand in unity and solidarity with our Asian community,” said Bradford.

Seniors Fight Back Volunteer and former professional fighter Fredia “The Cheetah” Gibbs, once dubbed “The Most Dangerous Woman in the World”, had a different view on the recent cultural relationship between the African American community and the Asian American/Pacific Islander communities. 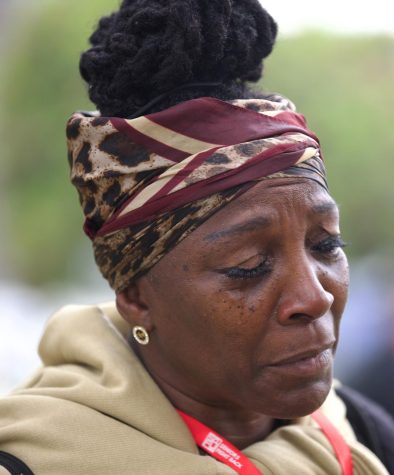 “I noticed that there has been a pattern of my people, African Americans who have been attacking Asians and particularly, you know, elderly, Asian women and Asian men. And when I saw that on television, it pissed me off,” Gibbs said.

The former Muay Thai kickboxing champion had tears welling in her eyes as she shared her opinion with The Union on the role some African Americans have played in the targeted hate crimes.

“How can you do that? That’s like your grandma, and to see a man do that. You know what I mean? You understand that when I saw that, I just got so upset. I had to be a part of it,” Gibbs said, wiping tears away. “You know, me being an African American. I also know what being discriminated against is all about and that makes no sense. So I stand with [Asian Americans and Pacific Islanders] very strongly.”

Other prominent speakers included California State Assemblymember Albert Muratsuchi and Field Deputy at LA County 2nd District, Ara An. Both condemned the rise in hate crimes and expressed support for the event and others like it. 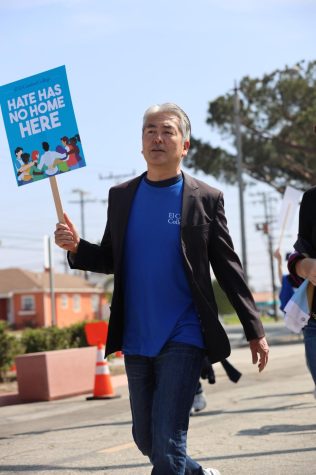 As the public remarks ended, it was time for the walk to commence.

Colorful lawn signs reading “Hate Has No Home Here” marked the predetermined walk path, serving as a route for walkers to follow.

The roughly one-mile walk around the campus grounds went along Crenshaw Boulevard and then Manhattan Beach Boulevard before cutting through the school and ending back at the Administration Building. 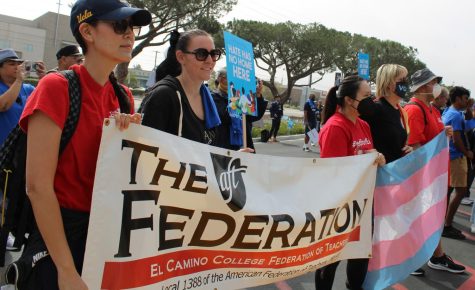 Members of El Camino College Federation of Teachers join community members, students and staff on campus, Saturday, March 26 for a community walk and self-defense workshop in response to ongoing concerns about the increase in anti-Asian hate crimes in Los Angeles and throughout the nation. In 2020, reported incidents of hate targeting Asian Americans increased 77% from the previous year in Los Angeles County, and an investigation by The Union revealed that 23% of the incidents occurred close to ECC. While 2021 data is not yet available, local and national projections are that incidents increased again in 2021. (Kim McGill | The Union)

Some cars on Manhattan Beach Boulevard honked their horns, smiled and waved as the walkers held up their signs and cheered back.

Board of Trustees President Nilo Michelin said to The Union that showing up for the event was the Board’s way of saying they support anti-hate and anti-racism initiatives.

“We have a problem whether it is as anti-Asian hate, anti-Latino, anti-African American hate,” Michelin said. “And the only way we’re going to be able to counter this, to defeat it, is by joining together by coming together at a grassroots level.”

The self-defense class taught by MMA fighter Ron Scoledang and his wife April began after the walk.

With Seniors Fight Back volunteers serving as practice combatants, attendees both old and young practiced these self-defense techniques consisting of three simple moves.

“I teach ‘the clench’, ‘the elbow’ and ‘the knee’ because they are the easiest things to teach and execute,” Scolesdang said. “They are also the things that will cause you the least amount of injury, elbows and knees are much denser than hands.”

Some of the high profiled speakers also participated in the self-defense class.

The strikes were audible as volunteer “The Cheetah” Gibbs, held the practice pads for Senator Bradford as he practiced his best elbows and knees. 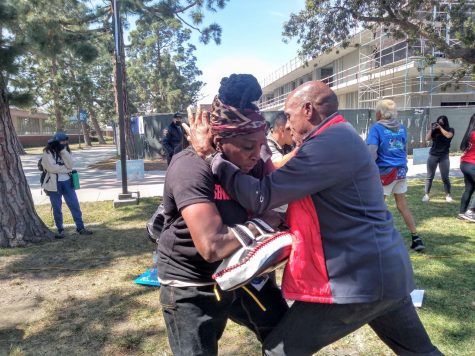 Seniors Fight Back volunteer and renowned professional fighter/martial artist Frieda “The Cheetah” Gibbs holds the pads as State Senator Steven Bradford practices his “clenches’, “elbows” and “knees” during a free self-defense class held on the library lawn at El Camino College on March 26. The free self-defense classes were provided by the non-profit organization Seniors Fight Back during the El Camino “CommUnity Walk. (Charlie Chen | The Union)

The volunteer complimented the State Senator on his strikes as the two shook hands after the demonstration was over.

Congresswoman Waters spoke to The Union, with a message for El Camino College students.

“I appreciate the students who have gotten involved in justice and helped create the Social Justice Center,” Waters said. “If students want their future is to be bright they’ve got to get involved in leadership and make sure that they deal with racism and hatred and discrimination. So I’m very pleased about what I saw here today.”