Chinatown Unified In Draft City Map, But Will A Majority-Asian

Get more in-depth, daily coverage of Chicago politics at The Daily Line.

CHICAGO — Chicago would get its first-ever majority-Asian American ward under a new draft map released on Wednesday. The future site of the Lincoln Yards mega-development would switch back to its previous alderman. And at least three ward boundaries would conveniently swerve around the homes of sitting aldermen’s political opponents.

The draft map developed by the City Council’s Committee on Committees and Rules is far from the final word on ward boundaries for the next 10 years. Rules committee chair Ald. Michelle Harris (8th) on Wednesday called the plan a “starting point” in negotiations and bid her colleagues back to the drawing board.

Related: Aldermen head ‘back to the table’ on remap, drawing out talks as Lightfoot heads to D.C.

“Our map doesn’t represent any one interest. It takes into consideration new and growing populations,” Harris wrote in a statement late Thursday. “As we enter this next phase of the map process and hold public hearings, the people of Chicago can weigh in and provide feedback. We’ll take all of the feedback into consideration and continue to negotiate as we have all along.”

Still, with the backing of at least two-thirds of the City Council, the so-called “city map” is a key weathervane for future talks and a signal of how aldermen are seeking to shake up their constituencies.

The new map proposal contorts the Near South Side 11th Ward just enough to give it a majority-Asian-American voting constituency, fulfilling a longtime demand of Asian American interest groups that have called for more cohesive representation for the city’s fastest-growing racial group. The ward currently represented by Ald. Patrick Daley Thompson (11th) is about 41 percent Asian American, according to the 2020 Census — in part because Thompson splits the Chinatown neighborhood with Ald. Byron Sigcho-Lopez (25th).

Thompson has proposed to trade away his corner of Pilsen to Sigcho-Lopez so he can fully subsume Chinatown. His plan would only get the 11th ward to about 48 percent Asian American representation — but it would unify the Bridgeport, Chinatown, Armour Square and Canaryville neighborhoods under his constituency, he told The Daily Line on Wednesday.

“For the first time ever, Chinatown would be consolidated into one ward — that was most important,” Thompson said. “The map that I proposed…keeps the community’s common interest and the neighborhoods intact.”

But the rules committee map “divides communities” to nudge the ward’s Asian American voting population past 50 percent, Thompson said. It does so by protruding the ward into McKinley Park, whose Chinese American population has grown sharply, while scraping off part of mostly-white Canaryville.

“We’ve solved one problem and created two more” by slicing up McKinley Park and Canaryville, “and I don’t think that’s right,” Thompson said. “That’s not something I can be supportive of.”

The draft map would filet Fuller Park and Canaryville among the 11th, 3rd, 15th, and 20th Wards.

Thompson reiterated his opposition to the plan in a lengthy written statement late Wednesday, saying neighborhoods should not be divided for the sake of creating a majority-Asian American ward.

“I have fought and will continue to fight to keep 11th Ward neighborhoods together,” Thompson wrote. “Dividing areas or neighborhoods based on race is indeed racism.”

Justin Sia, an attorney for the group Asian Americans Advancing Justice, wrote in a text message to The Daily Line on Thursday that his group is “encouraged to see that the Rules Committee map…contains an Asian American majority ward in Greater Chinatown.”

“As Alderpersons continue to negotiate and City Council considers more public comment, we’ll be watching closely to ensure that the makeup of Ward 11 does not dip below 50% Asian American, which would be unacceptable,” he added

The rules committee was on the verge of rolling out a map that would have politically advantaged 52-year veteran Ald. Ed Burke (14th), who is awaiting trial on a federal extortion charge. But the plan switched at the last minute after Mayor Lori Lightfoot threatened to veto any map that would carry water for her political nemesis from the Southwest Side, the Sun-Times reported earlier this week.

The resulting map all but evaporates what had remained of Burke’s Irish and Polish American constituency, bumping up its Latino population from 83 percent of the ward’s makeup to about 85 percent. It does so in part by giving up a three-mile stretch of Garfield Ridge that was dropped into the 14th Ward 10 years ago to boost Burke’s political fortunes.

The new map only barely keeps Burke’s 51st Street home inside the 14th Ward by extending a finger deep into the Archer Heights neighborhood. 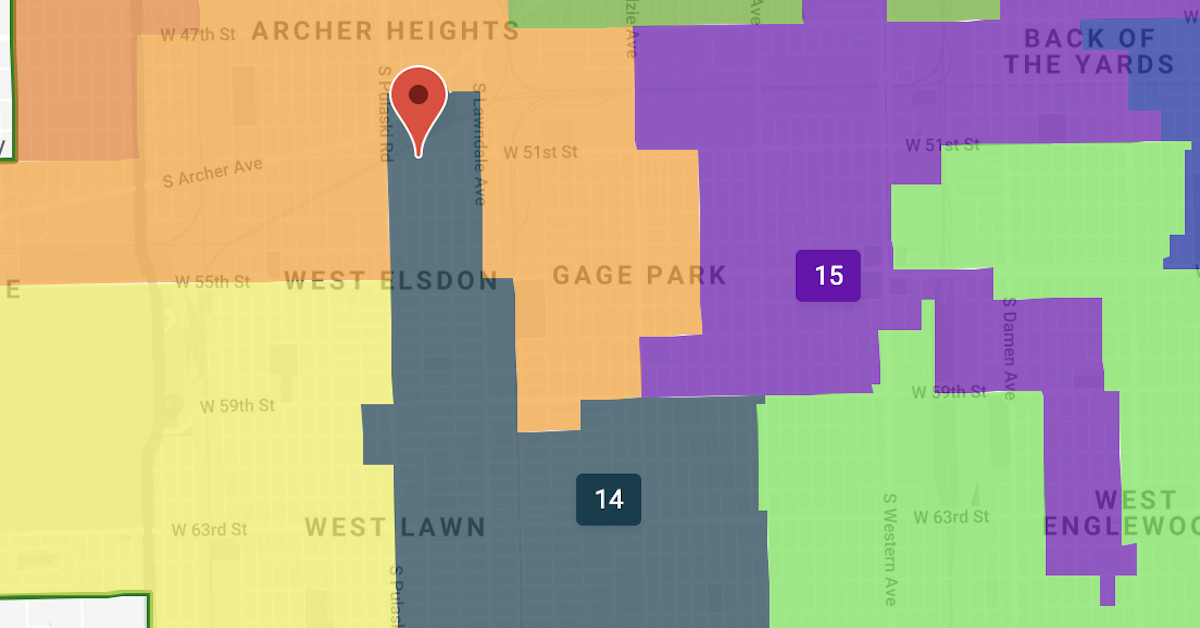 Ald. Silvana Tabares (23rd) had decried earlier attempts to relocate her ward “miles away” from her home, which she said was on track to be dropped into a new 13th Ward under the previous rules committee plan. But the released map would maintain her Garfield Ridge home within the heart of the 23rd Ward. It would also bump up the 23rd Ward’s Latino population from about 75 percent to 77 percent of the ward’s constituency.

Politico Illinois noted on Thursday that the latest proposed map would protrude the 40th Ward deep into the West Ridge neighborhood, swallowing up the home of Halle Quezada. Quezada challenged Ald. Debra Silverstein (50) last year in the race for 50th Ward Democratic committeeperson.

Quezada told The Daily Line that she was “not surprised” by the move, which she called “retaliatory” on Silverstein’s part. She noted that the map carves a “trail” to her doorstep while veering to keep the recently redeveloped Chicago Public Library Northtown Branch in the 50th Ward. 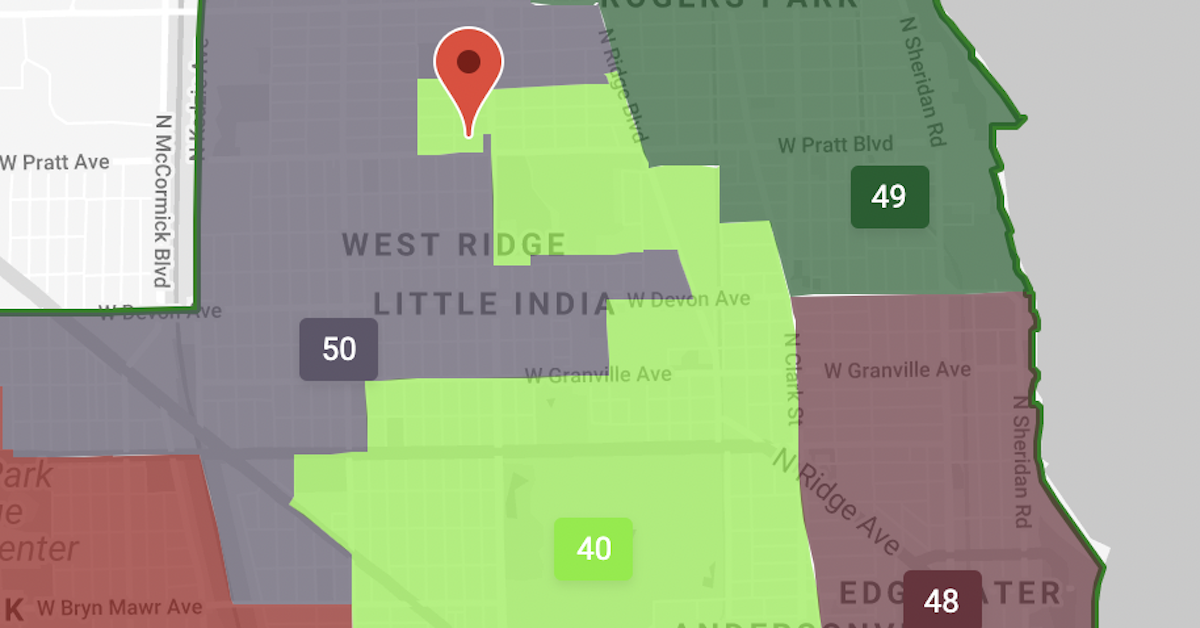 But Silverstein told The Daily Line on Monday that it was “not [her] intention to cut anyone out” of the ward.

“The 50th Ward gained a lot of population, and we were required by law to reduce our size,” the alderman said. “We have an extremely diverse ward and our focus was not to cut out any particular part, but to preserve the diversity of the ward that makes it so great.”

Sia of Asian Americans Advancing Justice lamented on Thursday that the “Asian American community in West Ridge is still split up” between the 40th and 50th Wards under the new proposal.

Silverstein’s is not the only ward that would advantage an incumbent alderman under the proposed map.

The proposal extends the 38th Ward, currently represented by Ald. Nicholas Sposato (38th), deep into the Six Corners Shopping District — just far enough to absorb the home of former Ald. John Arena, who was unseated in 2019 by Ald. James Gardiner (45). And it would dump the home of Megan Mathias, who has already announced a 2023 run against Gardiner, into the neighboring 30th Ward.

“I’m not surprised that he’s afraid,” Arena told The Daily Line on Thursday. “He thinks that by breaking up communities and neighborhoods that he can avoid being held responsible for his incompetence and thuggery.”

“It’s the classic move of somebody who can’t run on a record, so he wants to pick his voters,” he added. 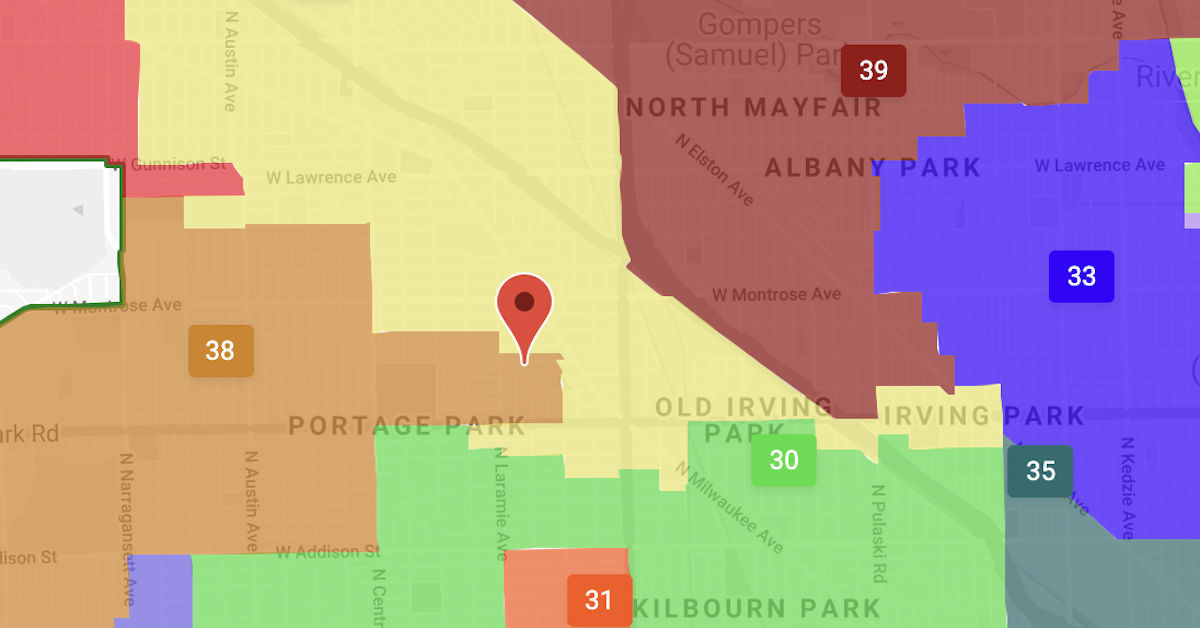 Former Ald. John Arena’s (45) home would be swapped into the 38th Ward under the rules committee proposal.

The map would also cut parts of the Old Irving Park and Independence Park areas, where Arena drew his heaviest backing in his three elections, out of the 45th Ward. And it would extend the 45th north into the relatively conservative Wildwood area, displacing 41st Ward Committeeperson Joe Cook.

Reboyras is one of 15 aldermen who filed a referendum on Thursday in support of the competing “Coalition Map,” which calls to leave Gutierrez’s home in the 30th Ward. But Gutierrez told The Daily Line on Thursday that she would “not be surprised if [Reboyras] is double-dipping” by working on both maps simultaneously.

“He’s going to lie in bed with anyone who can advance his political agenda,” Gutierrez said. 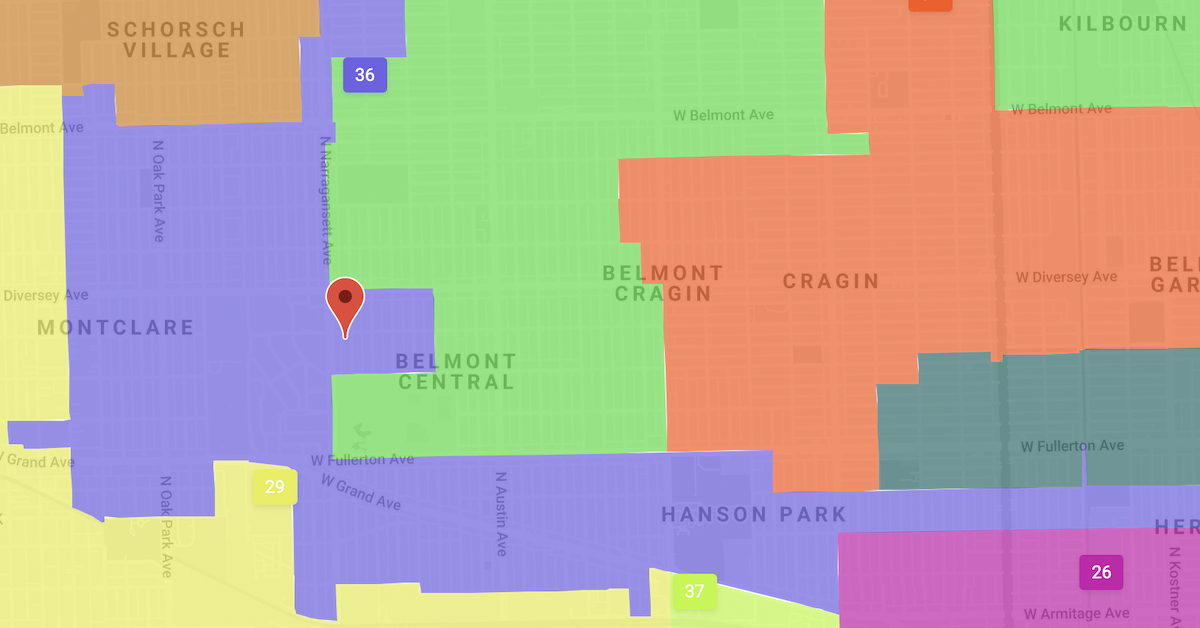 Jessica Gutierrez’s home would be mapped out of the 30th Ward under the rules committee map.

The home of Derek Lindblom, one of multiple challengers who took on Ald. Michele Smith (43) in 2019, would be scraped out of the 43rd Ward under both the rules committee map and the proposed Coalition Map.

“I had to make my ward smaller by several thousand voters” after population gains, Smith told The Daily Line on Thursday. “So where we had to, we put people back where they were before in the 32nd Ward.”

She said she has defeated “a jillion” challengers in the three city elections she has run, including by besting Lindblom by nearly 1,000 votes in the 2019 runoff.

Reboyras and Gardiner did not respond to requests for comment on Thursday.

The 62-acre “The 78” mega-development, which is slated for thousands of new homes and is one of five sites proposed for a potential city-backed casino, would flip from the 25th Ward to Ald. Pat Dowell’s (3rd) ward under the new proposed map.

In a statement, Sigcho-Lopez declined to comment on potentially losing the riverfront development site, saying the remap “needs to remain a community-driven process.”

“Because of that, I’ll be sharing this information with the 25th Ward Remap Coalition and the Community Advisory Council for the 78 to hear what they have to say,” Sigcho-Lopez wrote.

The 3rd Ward, whose population has grown since 2010, would give up most of its share of Fuller Park and would surrender some of its South Loop blocks under the rules committee map. But it would keep the Metra tracks near Museum Campus that have been proposed as the site of the “One Central” mega-development.

“The 3rd Ward has experienced tremendous growth over the past 10 years, and in order to balance the ward’s population with some of the other wards that have lost residents, the boundaries of the current 3rd Ward must be changed,” Dowell wrote in her latest constituent newsletter on Wednesday. “That means while the ward will sadly lose some of existing constituents, much of the ward will remain the same, and there is a tremendous opportunity to bring other parts of surrounding neighborhoods into the 3rd Ward in the next map.”

Ald. Susan Sadlowski Garza (10th) said during a Latino Caucus news conference on Wednesday that Michael Kasper, counsel for the rules committee, told her that her ward would have to push west into Pullman — a proposal she rejected.

The draft map ultimately kept Pullman in Ald. Anthony Beale’s (9) ward — but it proposed to protrude the 10th Ward into the Altgeld Gardens area, a plan Garza blasted on Wednesday.

She noted that the predominantly Black-populated slice of Altgeld Gardens is nearly 8 miles from her ward office, and a more than one-hour trip by public transit.

“My ward is made up of Black, Brown and white — I’m not afraid to take anybody,” Garza said. “But to disenfranchise those 4,400 Blacks on the other side? That is wrong, and that is what they want to do.”

The plan would also push Garza’s ward north into South Chicago, giving her most of the former U.S. Steel site on the city’s far south lakefront.

Justin Laurence contributed to this story.

Latino Caucus Puts Its Ward Map Proposal Up For Referendum: ‘It’s Time For The Voters To Decide’

Indicted Ald. Carrie Austin Will Retire, She Says, As Proposed Map Draws Her Out Of Ward

Roosters, Hot Dogs: What Do Chicago’s Newly Proposed Wards Look Like To You?

The Battle For Lincoln Yards: New Map Takes Megadevelopment From The Alderman Who Fought To Build It

Live Nation Won’t Open A Venue In Lincoln Yards, Ald. Hopkins Insists, But Critics Want Mega-Development Out Of His Ward