Fear, and Discord, Among Asian Americans Over Attacks in San Francisco 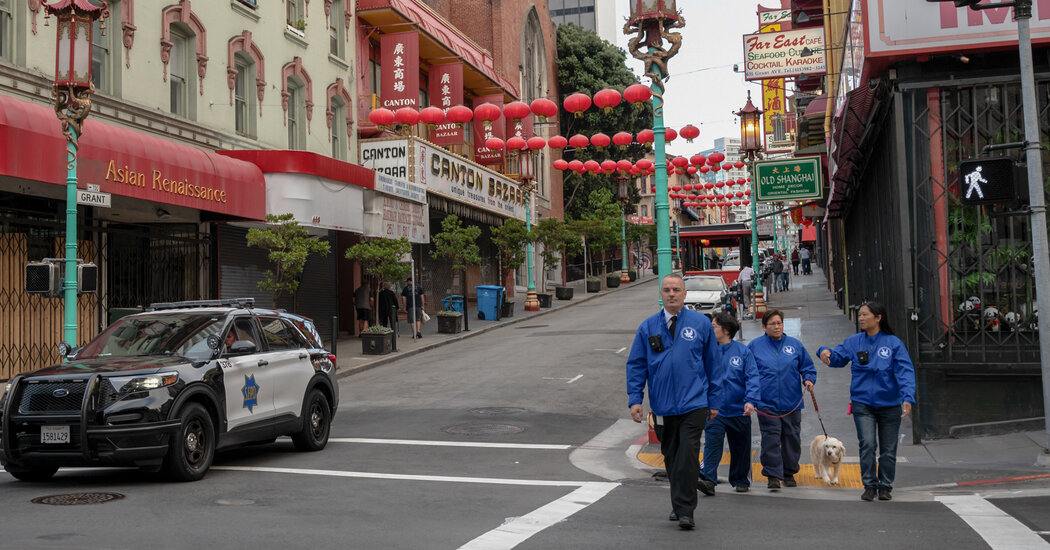 SAN FRANCISCO — Two grandmothers stabbed and a third punched in the face in broad daylight. An 84-year-old man fatally shoved to the ground while on his morning walk. In the past seven months, at least seven older Asian residents have been brutally attacked in San Francisco, a city with one of the largest Asian American populations and the oldest Chinatown in the country.

“It’s a horrible feeling to be afraid in your own community,” said John Hamasaki, who is a member of San Francisco’s Police Commission and who is ethnically Japanese. “People are genuinely afraid to go outside, to walk down the street alone.”

The attacks first shocked and angered Asian American residents in the city. But the question of what to do about the violence has now become a source of division.

Many residents of Chinese descent are calling for a significant increase in police patrols. The city’s Asian American leaders, however, said they would rather explore solutions that do not involve law enforcement. One of the most proudly liberal cities in the country is torn between its commitment to criminal justice reforms in the wake of George Floyd’s killing and the brutal reality of the city’s most vulnerable residents being stabbed in the middle of the day on busy city streets.

Connie Chan and Gordon Mar, the two members of the San Francisco Board of Supervisors who are of Chinese descent, have been under pressure from Chinese activists to increase police staffing, a move the elected officials have largely resisted. Chinese activists — many of whom also denounce Chesa Boudin, the city’s district attorney, for not being tough enough on crime and back a recall effort against him — have shown up at meetings to challenge officials, including Ms. Chan and Mr. Mar.

“I haven’t heard of anyone in the Chinese community who doesn’t want more police,” said Leanna Louie, a former Army intelligence officer who is Chinese American and who last year founded a neighborhood watch group called the United Peace Collaborative. “We are very dissatisfied with Asian representatives. We are going to work furiously to replace them.”

How city leaders, police officials and prosecutors should respond to the violence has been part of a bitter and emotional debate at a time when Asian Americans in California and across the country have been the victims of verbal and physical attacks during the coronavirus pandemic.

In San Francisco, a city where 34 percent of the population is of Asian descent, the attacks have shaken up the Chinese electorate, which has voted in increasing numbers in recent decades but still below their share of the population. The social fabric and history of the city are tightly interwoven with the Cantonese, Japanese, Filipino, Vietnamese and many other Asian groups that have immigrated to the city since its earliest days. The city’s first Asian American mayor, Edwin M. Lee, died in office in 2017, a symbol both of ascendant yet not fully realized Asian political power.

The assaults themselves have become a point of dispute. Asian American leaders and residents disagree over whether the attacks were random or were motivated by racial animus. None of those arrested in the seven most high-profile attacks since January have been charged with a hate crime. The attacks occurred while San Francisco has been confronting what many residents perceive to be a crime problem worsened by the pandemic.

Car break-ins in San Francisco occur at rates among the highest in the nation. And midyear crime statistics released on Monday show a sharp rise in people injured or killed in shootings. And Asian residents are not the only ones being assaulted: Crime data from the San Francisco District Attorney’s Office shows that Black, Latino and white residents are more likely to be victims of crimes involving force and trauma than those of Asian descent.

In the most recent attack against Asian Americans in mid-June, a 94-year-old grandmother of Chinese descent who was walking with a cane was stabbed in front of her apartment building, blocks from one of San Francisco’s most exclusive neighborhoods.

The city’s immediate response to the attacks was to redeploy 20 officers onto foot patrols. A multilingual hotline to report hate crimes was established. But both city and community leaders have acknowledged that those measures have not been enough.

“I take personal offense to what we see happening on the streets because I’m very sensitive about the need for us to take care of our elderly population,” Mayor London Breed said in an interview. “I was raised by my grandmother and I can’t imagine if someone did this to her.”

The mayor’s spokesman, Jeff Cretan, said she had requested the hiring of 200 officers over the next two years, roughly enough to replace officers who are retiring. The city’s Board of Supervisors scaled back the request to 135 officers, a move the Police Department says will result in the force shrinking because of imminent retirements.

Bill Scott, the chief of police, said he was disappointed by the Board’s decision.

“The style of policing that I believe San Franciscans want is labor-intensive — community engagement, foot beats, bicycle patrols,” Chief Scott said. “We are far short of where we need to be.”

Ms. Chan, one of the city’s two supervisors of Chinese descent, argues that the money can be better spent on other city services and that the police can do more with its current staffing.

Like Ms. Chan, Mr. Mar acknowledges the fear in the community. His wife for the first time purchased pepper spray for herself and relatives. A rash of burglaries during the pandemic in Chinese neighborhoods added to a sense of insecurity and of being targeted, he said. In his district the businesses hit include a boba tea shop, a shoe store, a dim sum restaurant, a doughnut shop and a Korean barbecue. In one case, a business was burglarized twice in one night by different thieves, he said.

But Mr. Mar rejects the idea that San Francisco needs more police officers. He agrees with the need for more foot patrols and believes that the police force can provide them by redeploying officers, not by adding staff.

Those arrested in the most high-profile attacks defy easy characterization. They have been white, Black and Latino. Nothing was stolen from the victims. The common thread among the suspects is that most, but not all, have a history of homelessness or mental illness, and often both.

The victims have included an 84-year-old Thai man, who was walking near his apartment one January morning when he was violently and fatally shoved, and two older women stabbed at a bus stop at rush hour.

Eric McBurney, a public defender who was born in Taiwan and adopted by white parents in the United States, says he has seen very few instances where hate was the motivator in the attacks.

“There’s no doubt that there’s a significant deal of racism in this country — I would know — but the story here of Asians being targeted is too simple,” said Mr. McBurney, who is representing the man accused of punching a Chinese grandmother and assaulting a Vietnamese man on the same day. “We are getting a steady stream of these cases — random attacks obviously connected to mental illness.”

Jenny Chan, a San Francisco resident who immigrated from China as a child and grew up in low-income housing in the Tenderloin, a neighborhood rife with drug dealing, is scathing of what she says has been inaction among San Francisco leaders.

Ms. Chan cites a litany of recent encounters on the streets: a man who jumped up and down on the hood of her car; drug users with needles in their arms; two men who openly shoplifted during a recent visit to her local pharmacy.

“Right now it’s just like a war zone,” she said of the Tenderloin. “We want stability. This is why we came to America.”