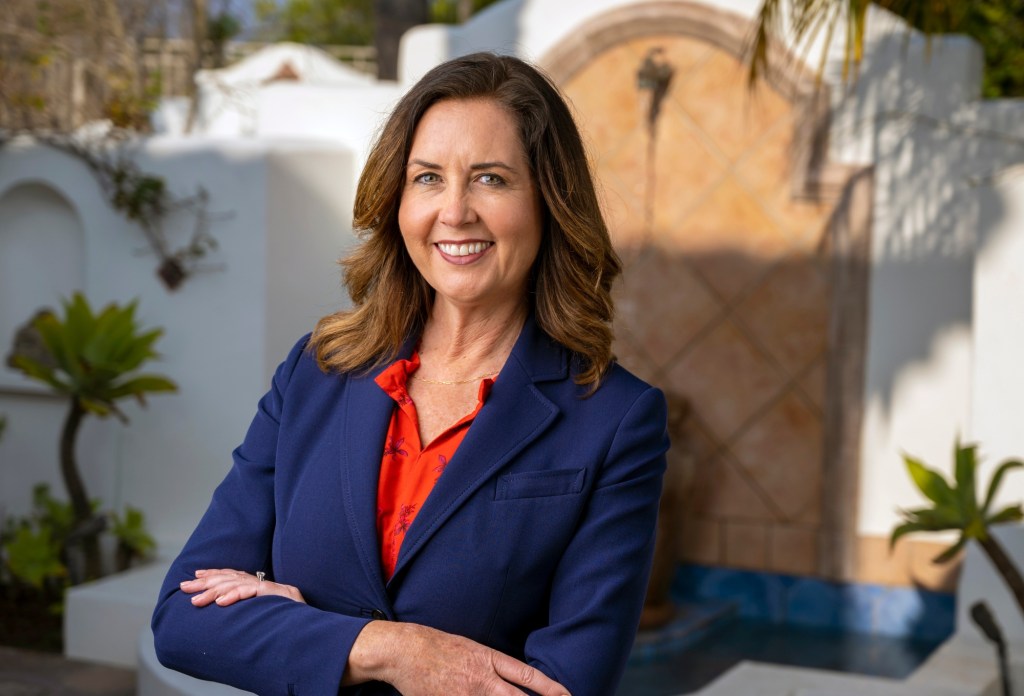 Huntington Beach City Councilwoman Kim Carr has decided to pursue bigger political territory – a perimeter that stretches some 50 miles from Bellfower in Los Angeles County all the way south to San Clemente.

Carr, 51, said Tuesday, Jan. 18, that she will run as a Democrat for the California State Senate in the newly drawn District 36. So far, the only other candidate in the far-flung district is Republican Assemblywoman Janet Nguyen, 45.

Both women live in Huntington Beach.

Carr, who served as Huntington Beach mayor in 2021, said the new map presents a blank slate that’s free of incumbents and political history.

“I realized this was a good opportunity, so I jumped on it,” Carr said. “Dave Min and Tom Umberg are not in this district. As mayor last year, it became apparent to me that I could do so much more on the state level.”

Based on changes in demographics, district boundaries were revised after the 2020 federal census count.

The new 36th District starts in Cerritos in Los Angeles County and swings southwest to include most of Little Saigon and all of coastal Orange County, from Seal Beach to San Clemente. Voter registration favors Republicans by 2.2 points.

“I had to make a decision about whether to campaign for City Council or try something different,” Carr said. Elected to the council in 2018, Carr would be up for a second term this November.

In Huntington Beach, the position of mayor rotates annually among seven council members. Carr’s turn fell in a year that saw the colorful and controversial MMA celebrity Tito Ortiz attract national headlines as a novice councilman. With his vocal anti-mask and anti-vaccine stance, news coverage of Ortiz diverted attention away from other city issues. Ortiz resigned in June after about six months in office.

However, Carr managed to make her own mark on several fronts, including her role as the face of the city in October, when a damaged offshore pipeline spewed oil off the city’s shores.

“We are on the ground here in Huntington Beach doing the work to solve some of the biggest issues facing our nation as a whole,” Carr said. “We need someone representing us in Sacramento who doesn’t just talk about problems but actually comes up with solutions.”

But Nguyen’s campaign consultant, David Gilliard, said that the assemblywoman is a better fit for District 36.

“Kim Carr would just be part of the super majority in Sacramento that has created our crises of crime, homelessness and high gas prices,” Gilliard said. “Voters in the district want someone who’s going to fight for the middle class and taxpayers.”

Gilliard pointed out that District 36 encompasses Little Saigon. “It’s Nguyen’s backyard,” he said. “She has represented that area for years. She feels very confident she can reach out to that base for support.”

Nguyen started her political career on the Garden Grove City Council in 2004, and then joined the Orange County Board of Supervisors before moving to the state level.

Though it will be majority White, Asian-Americans comprise about 21% of the new 36th district. The former District 37, which covered most of Huntington Beach, was 15% Asian.

The new district map may “look crazy” on paper, said Newport Beach political consultant Adam Probolsky, but “maps are drawn to keep communities of interest intact as much as possible.”

“Janet Nguyen will be a hard candidate to go up against,” Probolsky said. “Although people don’t just vote by ethnicity, there is a familiarity with her.”

Also, the new district leans more Republican than did District 37.

On the other hand, Probolsky said, candidates like Carr might be able to claim more experience in representing beach communities.

“District 36 runs all the way up and down the coast,” he said. “That might be one of Kim Carr’s messages: ‘Look, I’m the one who understands the beach communities. I’m the one who handled the oil spill.’ The threat of an oil spill is high on the minds of people who live along the coast.”