In California, a House race is testing what Asian Americans want 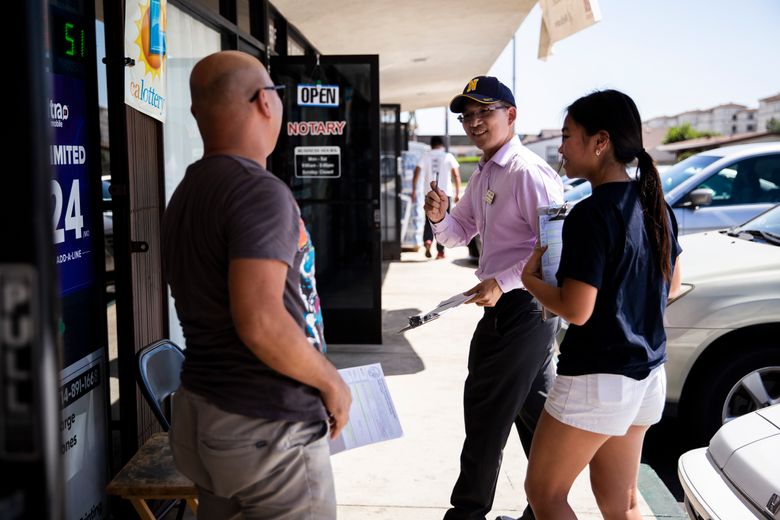 WESTMINSTER, Calif. — Dozens of Vietnamese-speaking volunteers filled a community center on a recent Wednesday to phone bank for Rep. Michelle Steel, R-Calif., a Korean American lawmaker whose campaign signs and flyers in Vietnamese and English lined the walls.

A few neighborhoods down, Jay Chen, a Democrat and Navy reservist of Taiwanese descent who is challenging Steel, passed out flyers outside of Zippost, a shipping business that residents often use to send packages to relatives in Vietnam. Chen, donning a Navy hat, walked around the plaza with a Vietnamese-speaking volunteer in tow helping residents register to vote.

Steel and Chen are vying to appeal to the Asian American voters who dominate the electorate in this slice of Orange County, making up one-quarter of the voting population. Their race — one of only a few dozen competitive ones that could determine which party controls the House — is being watched closely for clues about what may move voters in this increasingly critical bloc.

“The Asian vote can really give enough votes for a candidate to win,” said Mary Anne Foo, the executive director of the nonprofit Orange County Asian and Pacific Islander Community Alliance, a nonpartisan resource center. “What’s significant now is the number of Asian Americans running for office. Having representation is exciting.”

Across the country, Asian American voters, who comprised 4% of the electorate in 2020, are the fastest-growing population of eligible voters. The Asian American Voter Survey found in July that nearly half of Asian Americans identified as Democrats, about one-third as independents and about one-fifth as Republicans. About two-thirds voted for President Joe Biden over Donald Trump, surveys show.

However, an analysis by The New York Times found that immigrant communities shifted to the right as they had a surge in voters in 2020. The Asian American Voter Survey found that older Asian voters tended to identify as independent or Republican at higher rates than those in younger generations. Vietnamese Americans, who make up a large proportion of Asian residents in Orange County, also leaned more to the right.

Both candidates in the race have made tackling inflation the centerpiece of their campaigns, and both have also focused on safety amid an increase in reports of hate crimes against Asian Americans — themes that are top of mind for many Asian voters, according to analysts.

Karthick Ramakrishnan, the founder of AAPI Data, which helps conduct the annual Asian American Voter Survey, said the economy and crime were top issues for respondents, which could give an advantage to Republicans. But health care has also been a major issue, he said, which could boost Democrats, who recently pushed through Congress sweeping climate, health and tax legislation that would lower prescription drug costs and subsidize health insurance, among other benefits.

“The ethnicity of the candidate is a bit of a wash in terms of how much it will make a difference here, so it’ll be important to see the kind of appeals each of these candidates make,” Ramakrishnan said.

Still, race has hung heavily over the contest, sometimes in ugly ways.

Steel, who was born in South Korea and raised in Japan, has accused Chen of mocking her accent; he said at a campaign event in April that people need “an interpreter to figure out exactly what she’s saying.” Chen said in an interview that his comments were misconstrued and that he meant he did not understand her policies.

In the campaign feud, he has accused Steel of “red-baiting” by painting him as sympathetic to China’s authoritarian government. An accusation of communist sympathies may be particularly resonant to the county’s many refugees who still have bitter memories fleeing a communist regime.

Chen, the Harvard-educated son of immigrants who is a member of the board of trustees of Mt. San Antonio Community College and owns a local real estate business, said he has tried to appeal to right-leaning voters with his military experience. He served stints in the Middle East and the Korean Peninsula with the 7th Fleet, which helped evacuate refugees after the Vietnam War.

“Whenever I mention that, it really resonates,” Chen said.

Steel, a former member of the county board of supervisors and a local business owner, is fighting to hold onto her seat in a changed political environment. She narrowly defeated Rep. Harley Rouda, a Democrat, in 2020 in a district along the California coast that leaned Republican, becoming one of the first three Korean American women to serve in Congress. But she was displaced by redistricting and opted to run in a new district that tilts slightly toward Democrats.

Orange County was once described by President Ronald Reagan as a place “where the good Republicans go before they die.” Its partisan bent has since shifted as a younger, more diverse population has moved from the Los Angeles metropolitan area seeking more affordable living. Now Democrats outnumber Republicans in voter registration, and there is a sizable no-party-preference voter bloc, according to the latest statistics from the county voter registrar.

The pendulum swung for the first time in 2018, when Democrats swept into the House majority by flipping four seats in the area, giving Democrats control of all seven congressional seats in the county. It swung in the other direction in 2020, when Republicans reclaimed two seats in Orange County.

But the shifts reshaping the area are lasting, and they reflect similar ones underway in suburban enclaves across the country as immigrant communities relocate out of cities, said Christine Chen, the executive director of Asian and Pacific Islander American Vote, which helps conduct the Asian American Voter Survey.

Asian Americans make up more than one-fifth of residents of Orange County, which is known for having the largest concentration of Vietnamese people outside of Vietnam, many of whom sought refuge in the region after the Vietnam War.

The district encompasses Little Saigon, a stretch of Vietnamese-owned homes and businesses in the city of Westminster, which looks like most aging suburbs in Southern California: palm trees, stucco single-family homes and sun-bleached signs. Vietnamese and occasionally Korean and Chinese characters are predominantly featured on storefronts, and the political signage clogging up street corners feature mainly candidates with Asian surnames. Both campaigns and local organizations have been investing heavily on advertisements in Vietnamese.

The Democratic Congressional Campaign Committee announced in July that it planned to make a seven-figure investment to reach Asian voters in California, and the Republican National Committee has opened several Asian Pacific American community centers across the county, a multimillion-dollar investment aiming to recruit volunteers for voter outreach to support Republican candidates, with one of the first in Little Saigon.

John Le, 57, a Vietnamese American Microsoft engineer from Lake Forest who described himself as a traditional Republican, said that, partisan politics aside, he was proud to be in a district with two Asian American candidates. He said he planned to vote for Steel.

“It’s the American dream,” Le said. “We should be proud of these people who are giving back to the community. I will look at who will represent me the most.”

This story was originally published at nytimes.com. Read it here.