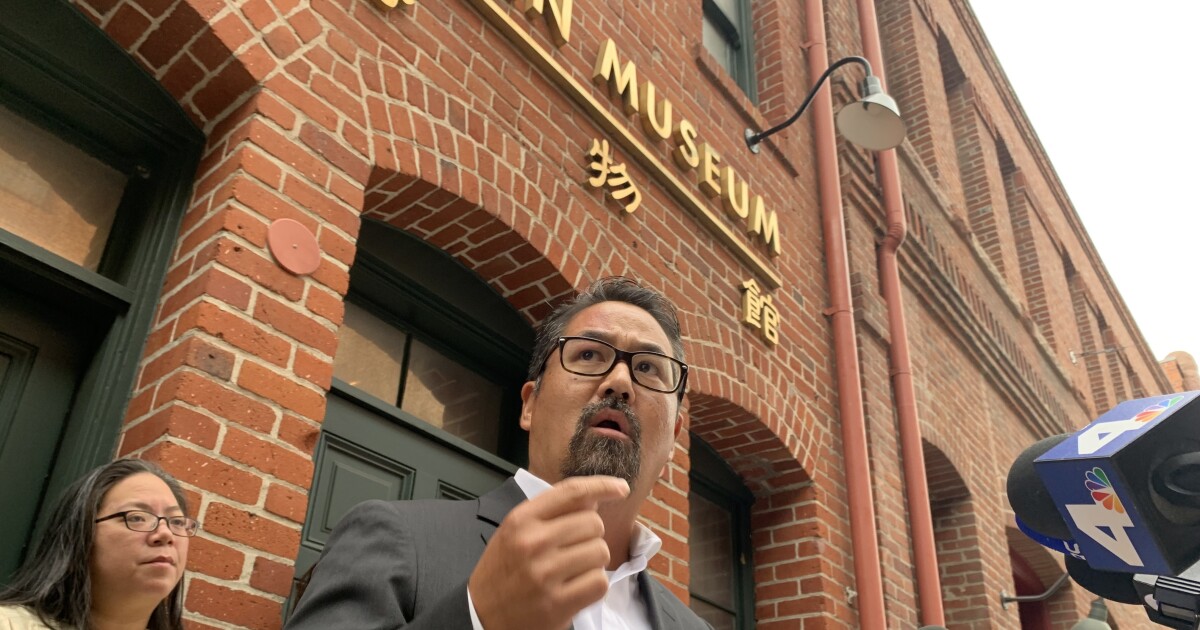 John Kim, president and CEO of Catalyst California, is part of a group of AAPI leaders calling for the resignation of the remaining officials recorded on the leaked audio and warning against political scapegoating of Asian Americans.
(Josie Huang/LAist)

Some of the region’s most prominent Asian American leaders are warning political candidates against using their communities to further inflame tensions following the City Hall tape leak scandal that has laid bare racial divides in Los Angeles.

With elections weeks away, the group said in a joint statement Friday that “communities do not want to be used as a scapegoat or political wedge.”

Some from the group gathered outside the Chinese American Museum in Chinatown Friday, noting that they were standing yards from where a mob massacred Chinese people in 1871, amid simmering resentment against foreign labor.

John Kim, who leads Catalyst California, a group that advocates for racial equity, said Asian Angelenos were scapegoated more recently after the 1992 uprisings when some leaders tried to deflect attention away from police brutality and onto Korean shopkeepers.

“Too often, it has been the AAPI community that’s been that racial buffer, or that racial scapegoat to inflame and agitate the masses and to get more votes,” Kim said.

“Do not use AAPI’s as scapegoats as a way to win your campaign that will do irreparable harm to Los Angeles, especially now,” Chu said.

A report issued this week by the group Stop AAPI Hate drew a line between hate incidents and discriminatory language about China, in particular, used by candidates and elected officials from both parties to play on fears about COVID-19 and downturns in the economy.

“We’re calling for AAPI voters to speak out when they see this type of language being used by politicians,” said Manjusha Kulkarni, co-founder of Stop AAPI Hate. “We know it impacts them and we know it brings harms to our community.”

The group of AAPI leaders also demanded that all of the officials who made racist remarks on the leaked audio step down.

While two of those on the recordings, former L.A. City Council president Nury Martinez and Ron Hererra, the head of the L.A. County Federation of Labor, have given up their posts, L.A. councilmembers Gil Cedillo and Kevin de León have defied calls to step down.

“We are at a very raw point in the city of Los Angeles, where feelings are at an all time high of anger and outrage,” Chu said.

The group did not address any particular city race — the most high-profile one being the mayoral contest between Congressmember Karen Bass and developer Rick Caruso.

Several of the letter’s signatories, including Chu, have endorsed Bass, or are from organizations that have such as the Korean American Democratic Committee, the Chinese American Citizens Alliance and Pilipino American LA County Democrats.