WASHINGTON – Some Asian American lawmakers warn that disparaging language framing China as a top economic competitor may spur a new wave of anti-Asian violence in the U.S.

Their concerns have grown in recent weeks as Congress has turned its focus to a bill, known as the COMPETES ACT, aimed at strengthening America’s supply chain amid a shortage of goods.

The bill, frequently referred to as the “China competitiveness bill” or simply “China bill,” passed the House in early February, and will enter negotiations with the Senate before final legislation can be sent to President Joe Biden.

Republicans who opposed the legislation attacked Democrats for not being hard enough on China.

If the bill is “how America competes with China, then America is going to lose,” House Minority Leader Kevin McCarthy, R-Calif., said on the House floor days before the bill passed. According to McCarthy, the legislation would fund Chinese Communist Party propaganda and make the U.S. more vulnerable to Chinese espionage.

Such language concerns members of the Congressional Asian Pacific American Caucus (CAPAC), which bills itself as non-partisan but all of whose members are Democrats.

The group, much like others representing minority concerns, often responds to issues related to Americans of their ethnic community. Members were outspoken following the Atlanta spas shooting in March where six Asian women were killed, for example, and pushed the Biden administration for Asian representation in the Cabinet.

“​​We are very concerned about this hate generated because of economic issues now,” said Democratic Rep. Judy Chu of California, who chairs the caucus. “The last two years have been about Coronavirus, but this issue is about economic rivalry.”

Asian American Democrats on Capitol Hill have couched their support of the bill – which is backed by the vast majority of the party and the Biden administration – with words of caution about stoking the anti-Asian sentiment that shot up during the COVID-19 pandemic and has been punctuated with recent physical attacks and slurs. Asian American Republicans members, however, argue that they can be both critical of the Chinese government while outspoken against anti-AAPI violence.

“A political environment in which politicians are trying to outdo each other in terms of playing to nascent fears in the public about China as a rival will boomerang back on Asian Americans,” Rep. Mark Takano, D-Calif., said of his concerns.

The debate comes amid ongoing violence against Asian Americans. Last month, an Asian woman in New York City was pushed to her death while waiting on a subway platform. Last weekend, another Asian woman in the city was followed into her sixth-floor apartment and stabbed to death. While neither incident has been classified as an official hate crime, advocates say it’s highlighted a growing trend of attacks on Asian Americans, especially women.

As the House debated the America COMPETES Act earlier this month, CAPAC reissued guidance urging all lawmakers to “consider the way our messaging on China can impact Asian Americans here at home.”

“We should not rely on fear of China to make our case,” Chu wrote in the Dear Colleague letter to Congressional offices. “That will both obscure the policies in this bill while encouraging more xenophobia from those who give credence to Cold War rhetoric painting Chinese people and those perceived to be Chinese as an existential threat.”

The CAPAC originally shared recommendations last summer on how to speak about China and the Chinese Communist Party. At the time, the caucus warned, “the rhetoric used to describe the People’s Republic of China … encourages xenophobia and racism against Chinese Americans and those perceived to be Chinese.”

Asian American members of Congress who spoke to USA TODAY stressed there are valid reasons to criticize the Chinese government, but said politicians and the media should be especially mindful in how such criticism is worded to not encourage an increase in anti-Asian attitudes. The CAPAC guidelines suggest making a distinction in criticism of the Chinese Communist Party, rather than criticizing China at large, using specific language, and avoiding referring to China as an “enemy.”

“The way that politicians and the way that leaders in the community characterize and talk about that competition can result in anti-Asian American sentiment and even anti-Asian sentiment, which is not okay either,” Takano said of the caucus’ concerns.

Chu said that Democratic members also have been guilty of using language that villainized China to discuss COMPETES. That’s why she decided to not only re-release the language guidance but also to speak about the issue during a recent Democratic caucus meeting.

“Sadly I think the incidents continue unabated,” said Manjusha Kulkarni, co-founder of Stop AAPI Hate and executive director of the AAPI Equity Alliance. Although the coalition has yet to release data from the last quarter of 2021, Kulkarni said preliminary findings suggest the “number has continued to climb.”

Kulkarni said that while COVID-19 was “in many ways the initial impetus,” for the wave of violence against the AAPI community, now the coalition is starting “to see other ways in which sinophobia and overall animus against people of color” is triggering attacks. 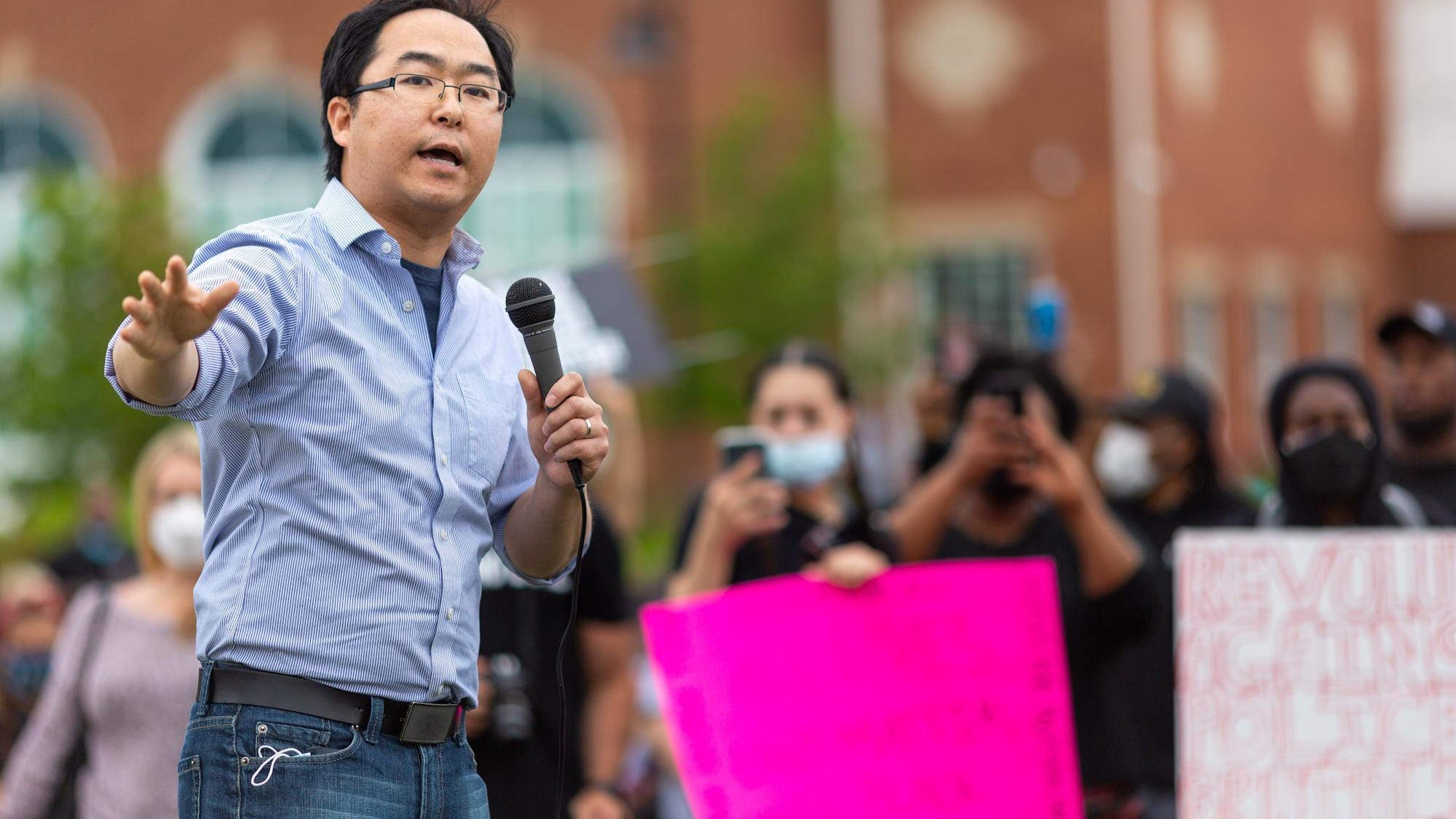 “It’s not just about COVID, it’s a broader issue,” said Rep. Andy Kim, D-N.J., a Korean American. “And it’s one that may go on for decades to come as we are seeing more and more likely that global dynamics are going to be dependent upon this relationship and and competition at times between the United States and China.”

Comparisons to Japanese internment and other dark chapters of U.S. history

“The last time that the United States was in tensions and in conflict with an Asian superpower, the United States interned tens of thousands of Japanese Americans in camps, so we don’t have a great track record,” Kim said.

Chu and Takano drew comparisons between what’s happening today and the political environment surrounding the murder of Vincent Chin forty years ago.

Chin, a Chinese American, was killed in a racially motivated attack by two white autoworkers in Detroit in 1982. The workers blamed Chin for the fact they were out of work amidst economic competition with Japan, which was especially painful in a city home to America’s auto industry.

CAPAC members expressed concern that the focus on economic competition with China presents a new angle for discrimination, following the rise in anti-Asian violence as a result of the pandemic.

Republican Asian American lawmakers, however – who have been particularly tough in their criticism of China – argued that there is a clear distinction between their attacks on the Chinese government and violence against Asian Americans.

“We can treat all Americans with respect, know that no American of any ethnicity is responsible for COVID-19, and still be wary of threats posed by the Chinese Communist Party, (North Korean leader) Kim Jong Un and other authoritarian regimes stopping at nothing to destroy our freedoms and way of life,” Korean American Rep. Young Kim, R-Calif., said in a statement.

“I am always, always standing up for the Asian American Community, but this is [the Chinese Communist Party],” said Rep. Michelle Steel, R-Calif., who disagrees that being tough on China is directly related to violence against Asian Americans. “I’m not going after Asia. That’s just not really happening. I’m just going after communism.”

“I was called Asian-bashing. How can I be Asian-bashing my own self, right? And xenophobic. I mean, give me a break,” said Steel, a Korean American. “We talk about MS-13, do you think that we’re going to go after all the Hispanics because of the gangs we are talking about?”

Kulkarni of Stop AAPI Hate, however, said that the language used around China can have a different impact than that used to describe other countries, such as Germany or Russia.

Andy Kim challenged those who don’t see a connection between the rhetoric around China and the treatment of Asian Americans to go speak to AAPI communities about their experience the last two years.

Opinion: China is definitely on the rise. But don’t write off American dominance just yet.

“What it does is it pours gasoline on the fire, it raises up this temperature and and it causes an immense amount of tension,” he said.

Kim told USA TODAY that he believes some elements of anti-Asian sentiment and racism are getting worse, pointing to conversations with his six-year-old boy about why children at school “bow to him and say ni hao (‘hello’),” and how he felt like he needed to tell his parents to not go to the grocery store due to safety concerns during the pandemic.

“I certainly feel like I’m losing a bit of my patience,” he said.

The powerful but tragic effect of the Atlanta spa shooting

“It was very hard for us to get the attention of the American public until the shootings at the Atlanta spas,” Chu said. “It was clear that he was very intentional in killing Asian women, and that woke up the American public as a result, we had so many more people and groups supporting us.”

In the months after the shooting, the Covid Hate Crimes Act passed with bipartisan support, aimed to address the surge in anti-Asian violence by expediting review of hate crimes, establishing a multilingual online reporting system, and coordinating local law enforcement and community groups to raise awareness about reporting hate crimes.

With the anniversary of the shooting approaching, Asian American lawmakers are torn on the impact of the legislation. In September, Sen. Mazie Hirono, D-Hawaii, and Rep. Grace Meng, D-N.Y., wrote a letter to Attorney General Merrick Garland requesting updates on the implementation of the legislation.

“We actually met with U.S. Attorney General Merrick Garland in October, specifically to get updates on the implementation of the law,” said Chu, who added “we’re very encouraged.”

Chu said she hopes to have Rachel Rossi, the Justice Department Hate Crimes Coordinator, at a future CAPAC meeting to learn more about the implementation.

“The Department of Justice owes us that kind of information. I’ve not seen anything that leads me to believe that there have been big changes. I think that it takes time to implement some of this, so I get some of that. But I haven’t seen any significant changes as of now,” Kim said.

“We’ve asked Department of Justice for an update. I believe that they will be doing some hearings and testifying on the Hill in the coming weeks, hopefully, to get a better fulsome idea what they’re doing. So, I kind of stand by to wait for that. I’ve not been given any proactive information from them in terms of how they’re doing,” he added.

Since Jan. 2021 more than 25 people have been charged in more than 20 hate crime cases against Asian Americans, and more than 25 defendants have been convicted, according to DOJ figures through Feb. 8 2022. The agency website has been updated to include information on reporting hate crimes in 18 of the most spoken AAPI languages.

Kim said he doesn’t see the country being anywhere different than when the shooting took place almost twelve months ago. “There hasn’t really been a lot of progress and a lot of change,” he said. “There’s still continued attacks. And I don’t think we’ve really addressed any of the deeper fundamental challenges that are out there.”

“I wasn’t expecting them to be solved or go away within just a year,” Kim said. “But I did hope that we would make more progress.”

The Senate version of the COMPETES Act, the United States Innovation and Competition Act of 2021, passed in June. Senate Majority Leader Chuck Schumer, D-N.Y., announced last week that the Senate is working on a formal conference process to work out the differences between the House bill and its Senate counterpart – now renamed the Make It In America Act. Following conference, the bill will be sent to Biden for his signature.