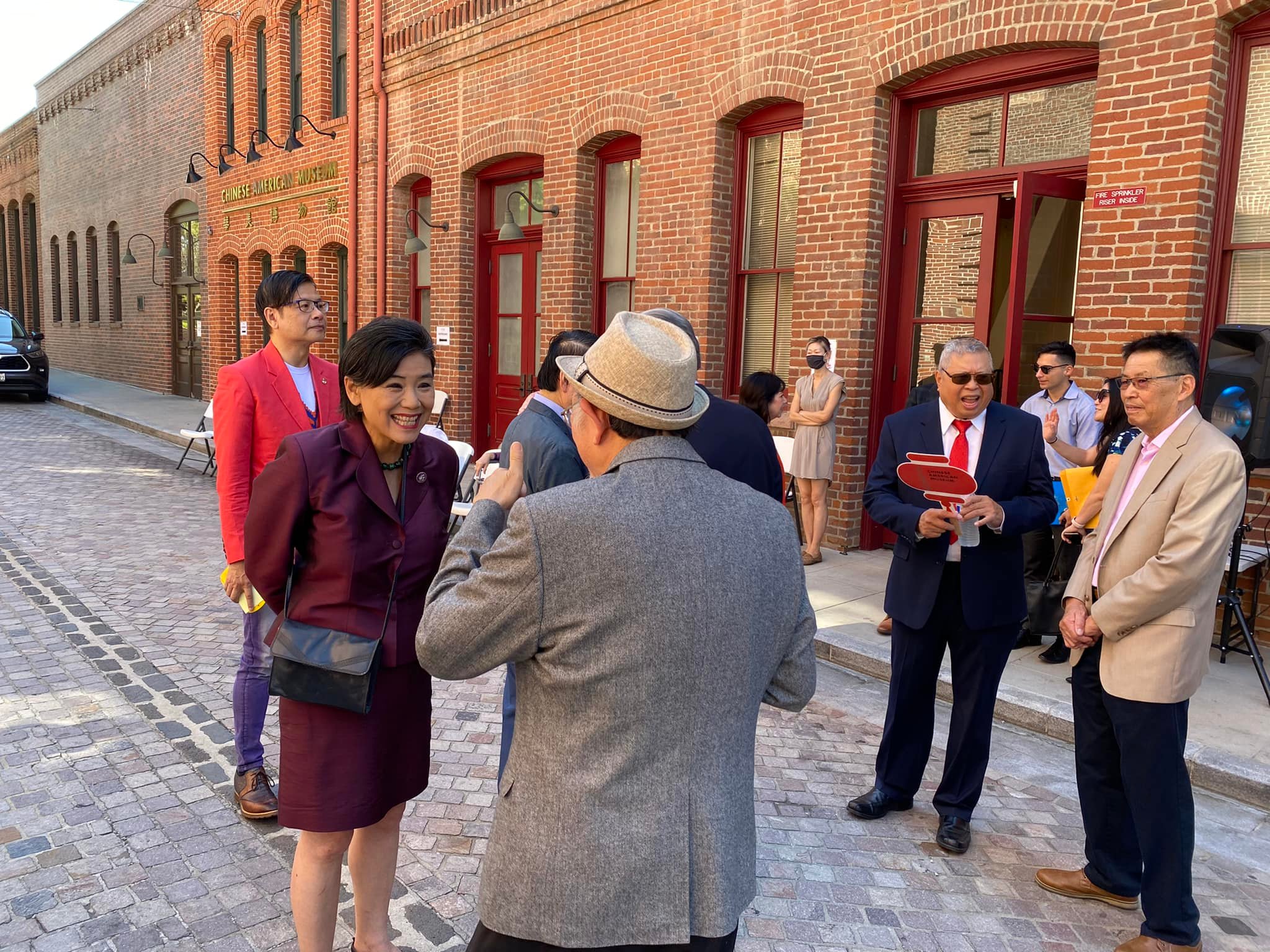 Rep Judy Chu at the groundbreaking for the expansion of LA’s Chinese American Museum. Photo by Erin Chew, AsAmNews

So much so that she recently donated $375,000 to expand the museum. Chu and her brother Dean J Chu, made their financial contribution in the memory of their parents.

In her speech during the groundbreaking on August 13, Rep Chu spent time reflecting upon the history of Chinese Americans and how the community was discriminated against and often invisible. In many ways, this is no different from certain situations happening in the present day.

“There was a time when the contributions of Chinese Americans were overlooked, and we were invisible in our nation’s history,” she said. The Chinese Exclusion Act of 1882, one of the most discriminatory acts in American history was not taught in most schools for decades. Chinese American railroad workers of the late 1800s weren’t even allowed to be in the picture, celebrating the completion of the transcontinental railroad, despite the fact that they were instrumental in building it”, Chu proclaimed. 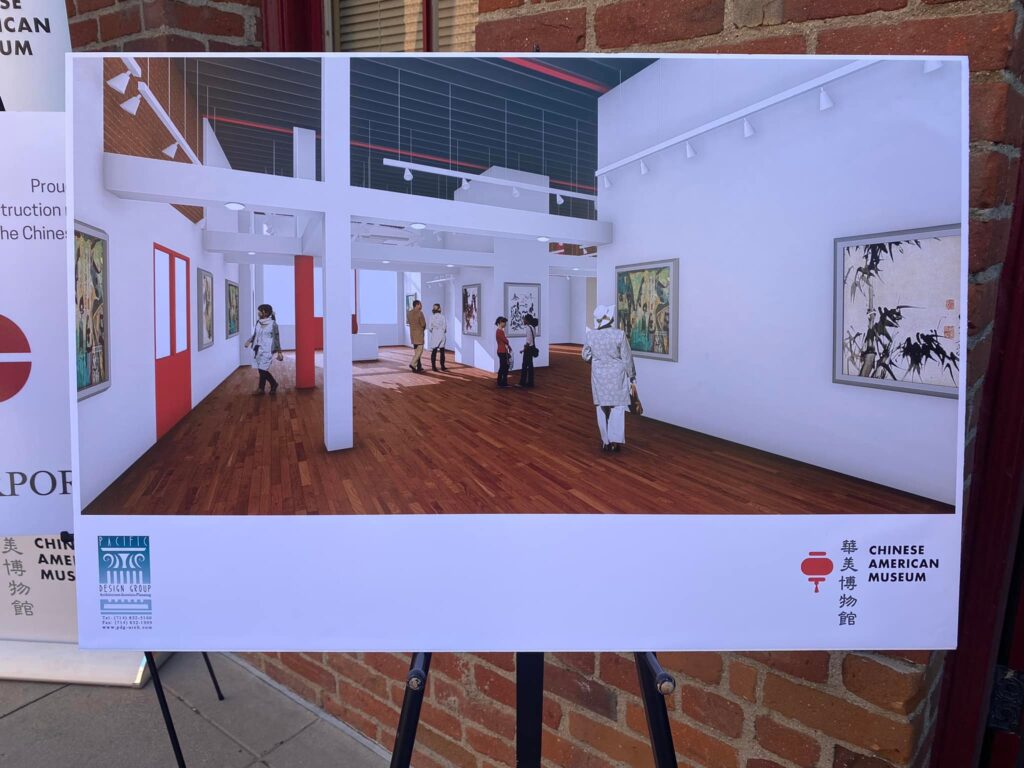 This the purpose of the Chinese American Museums in Los Angeles – to educate, spread awareness and remind everyone who walks through their doors that the community has persevered in both good and bad times. Supporters and dignitaries gathered to talk about Los Angeles and its deep roots with the Chinese community.

“The worst lynching in American history took place only a few steps away from this Museum building in 1871, right over this next block in LA Chinatown, and yet Americans as a whole, let alone Angelenos do not know about it, and this museum is really turning things around,” Chu reminded the assembled crowd which included Los Angeles County Supervisor Hilda L. Solis as well as Californian Assembly Member Mike Fong, former California Assembly Member Mike Eng and other museum officials and major donors and supporters. Both Rep. Chu and Supervisor Solis have played key roles in advancing the museum’s growth.

Rep Chu references how the services and programs offered by the Museum since it opened its doors in 2003 have allowed visitors and Angelenos to foster a deeper understanding of Chinese American history – from the 1800s to the present time. The 1982 murder of Vincent Chin in Detroit and how that tragedy mobilized the broader Asian and Chinese American community to fight for their rights in America takes a prominent role at the museum. In addition, the museum for almost two decades has made significant contributions to the research of both local and national Chinese American history and has preserved artifacts that would otherwise be lost.

In addition, Rep. Chu has a strong personal connection to Los Angeles with a long family history starting with her grandfather. She mentions that the money her family has raised and donated to the museum is to commemorate the memory of her parents who despite challenges persevered and made a life for her and her family.

“The Chu family donation is dedicated to my parents – Judson and May Chu, who passed away a few years ago. Their experiences living, working and raising a family in Los Angeles reflect the experiences of many Chinese Americans in this country. My father was born in California and his father – my grandfather immigrated from China at the turn of the century. My father grew up working night and day in his father’s small Chinese restaurant nearby. My father served in the US Army during World War II and as an American GI was allowed to go to China and marry and bring my mother to America.

“Life for my mother in the early days was hard. She was isolated and lonely without an understanding of English and American culture. But, she persevered, learned English, got her high school degree and learned finance to support my father and her four kids”. 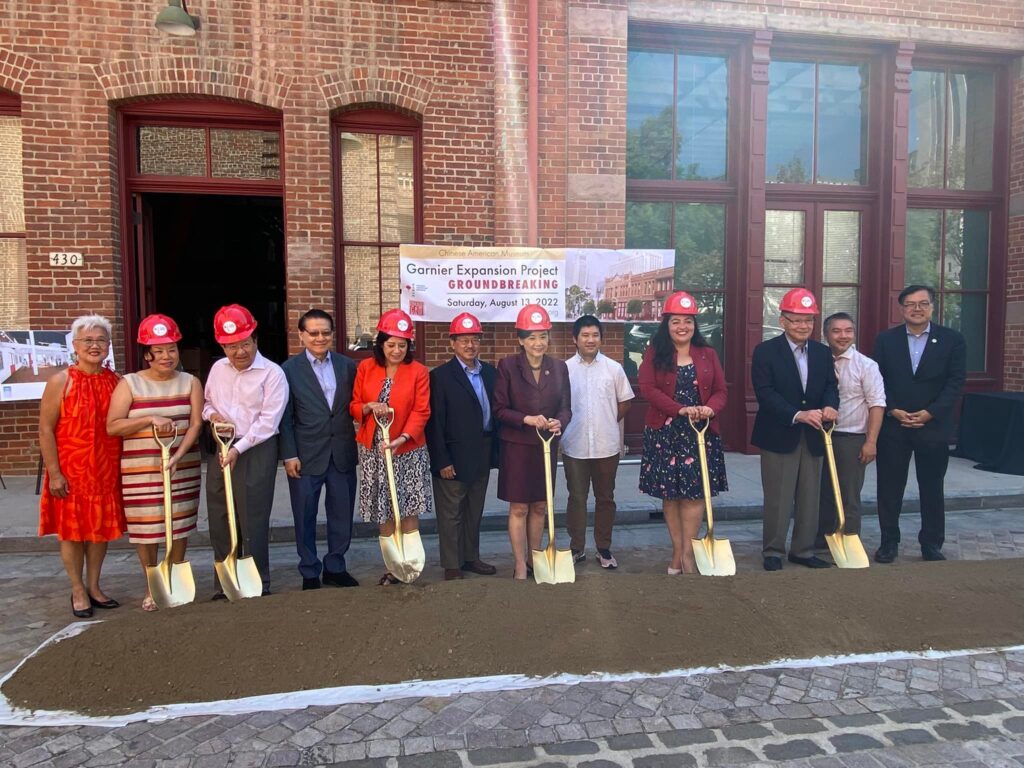 Rep. Chu credits the hard years her parents endured for making possible the achievements of her family today. It was their perseverance to create a better life that inspired her to get into politics and become the first Chinese American woman in history to be elected into the US Congress. Rep Chu’s iconic red suit which she donated as an exhibit is displayed as part of the history of Chinese Americans in Los Angeles, as well as her legacy in U.S. politics. Exhibits like this and others allow the museum to continually encourage Chinese Americans to be more civically engaged and participate in the political process.

Finally, Rep. Chu who has been on the frontlines to combat anti-Asian hate talks about how racism and discrimination have been spurred by the ignorance of Americans and the lack of understanding of the history of Asian/Chinese Americans. She credits the museum for consistently providing quality programs that educate and engage the community – but to do more the museum needs the money and needs to expand.

“It has become very apparent that many Americans are ignorant about us. That is why we need to educate and engage not only our own Chinese community but with every American community about our history. It is especially important that we reach our youth as well as they will be learning from us and the lessons from our history. I am proud to support this museum as together we can build a more inclusive future for all of us”.

If you happen to visit Los Angeles, or are a local, make a visit to the Chinese American Museum. The museum is located in Downtown Los Angeles within El Pueblo de Los Angeles Historical Monument, which is a 44-acre park in an area considered to be the City’s birthplace.

“The Stop The Hate campaign is made possible with funding from the California State Library (CSL) in partnership with the California Commission on Asian and Pacific Islander American Affairs (CAPIAA). The views expressed on this website and other materials produced by Asian American Media, Inc. do not necessarily reflect the official policies of the CSL, CAPIAA or the California government. Learn more at capiaa.ca.gov/stop-the-hate.

AsAmNews is incorporated in the state of California as Asian American Media, Inc, a non-profit with 501c3 status. Check out our Instagram account. Go to our Twitter feed and Facebook page for more content. Please consider interning, joining our staff, or submitting a story, or making a tax-deductible financial contribution. We are committed to the highest ethical standards in journalism. Please report any typos or errors to info at AsAmNews dot com.
Source