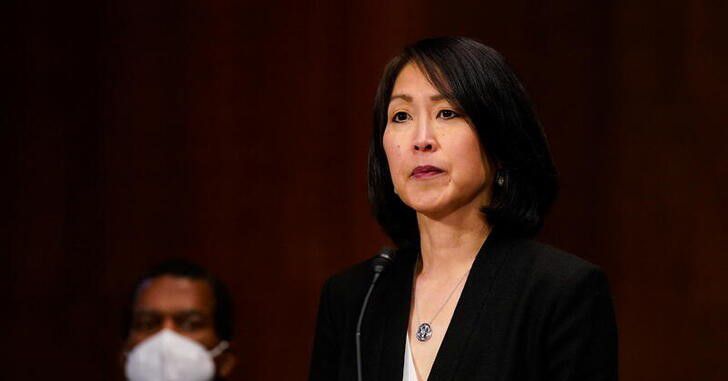 Kenly Kiya Kato, a nominee to be a U.S. District Judge for the Central District Of California, testifies during a U.S. Senate Judiciary Committee hearing on Capitol Hill in Washington, U.S., February 1, 2022. REUTERS/Elizabeth Frantz

(Reuters) – Senate Republicans on Tuesday grilled a judicial nominee of Japanese descent about a book review she co-wrote as a law student that said neo-conservative Asian-Americans internalize “the dialogue of oppressors.”

U.S. Magistrate Judge Kenly Kato faced questions from GOP senators about her views on discrimination as the Senate Judiciary Committee considered her nomination by President Joe Biden for a seat on the U.S. District Court for the Central District of California.

Rochon, the Girl Scouts of the United States of America’s general counsel, is nominated to serve as a federal judge in Manhattan. Sykes, a Native American state court judge in California, was also tapped to join the Central District of California.

Democratic Senator Dianne Feinstein of California said Kato “would be an asset” if confirmed to be the first Japanese-American woman to serve in the Central District of California.

Kato told the panel that she was driven to the law by hearing about her parents’ experience as children being detained in internment camps along with some 120,000 other Japanese Americans during World War II.

“Hearing those stories of my family’s first-hand experiences impressed upon me from a very young age the critical importance of securing our constitutional rights for everyone,” she said.

The discussion shifted to her views on affirmative action, after Republican Senator Chuck Grassley of Iowa asked about a book review she co-wrote when she was a 23-year-old Harvard Law School student.

The 1995 article said neo-conservative Asian Americans “internalize the dialogue of oppressors, believing in the values of the status quo and condemning the activism of their group,” a statement Grassley asked if she still believed.

Kato said she “had no recollection of what we were trying to convey.”

But Senator Ted Cruz, Republican of Texas, said the book review conveyed that “to be sufficiently woke, an Asian American must support policies that discriminate against Asian Americans.”

He noted Harvard, her alma mater, was facing a lawsuit before the U.S. Supreme Court alleging it discriminated against Asian-American undergraduate applicants through race-conscious admissions processes aimed at boosting campus diversity.

“Does that practice concern you?” Cruz asked.

Kato declined to discuss the case, a challenge to affirmative action on college campuses, noting it is pending.

Nate Raymond reports on the federal judiciary and litigation. He can be reached at nate.raymond@thomsonreuters.com.