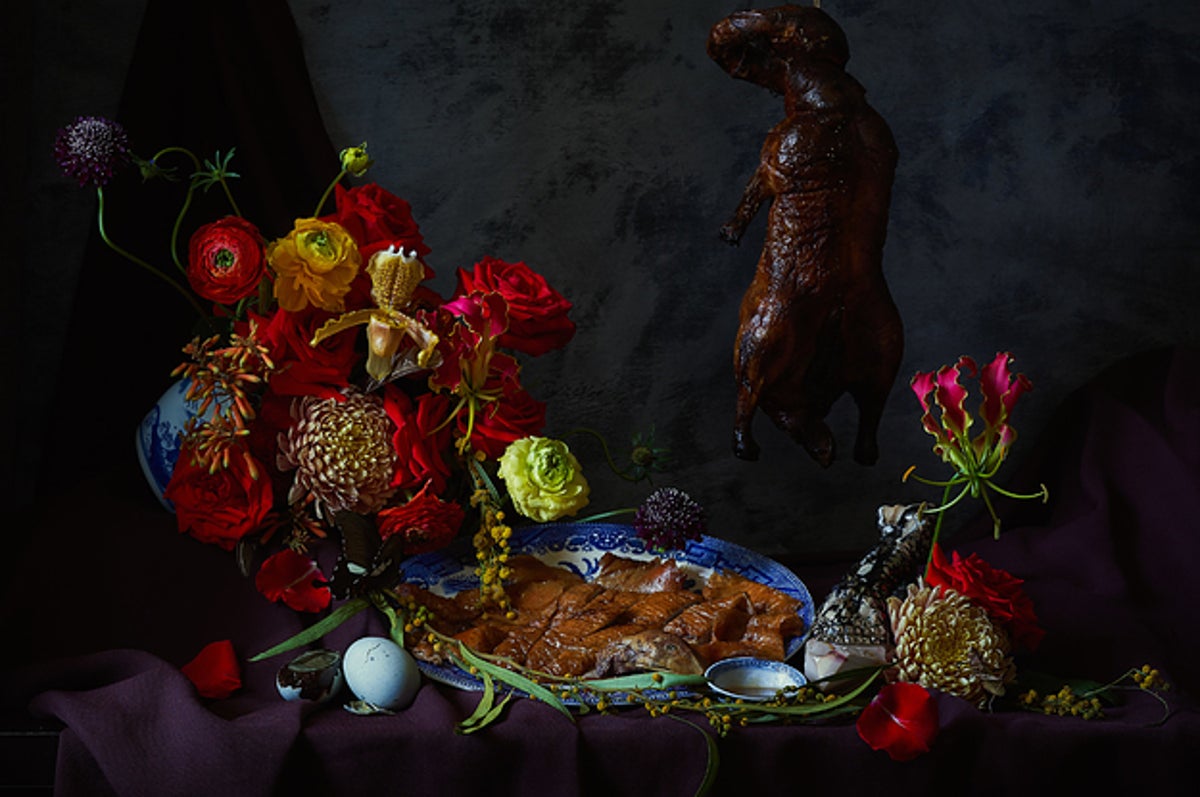 “When you start digging into the history of these photos, you see so much from other cultures that goes unacknowledged.”

Stephanie Shih, a photographer and professor in Los Angeles, researches linguistics at the University of Southern California. She got into photography via taking pictures of the cakes she baked when she was in grad school. In February, her still life pieces will appear in an exhibition of food art at Hashimoto Contemporary gallery.

Shih’s work looks at Asian American experiences through still life and the history of art across cultures. The works of Dutch masters, like Johannes Vermeer and Jan Brueghel, are still considered the apex of still lifes; their paintings are what you see most often exhibited in American museums. Shih said that even though we think of their paintings as classically European, there were Asian influences present in the work from the beginning. “When you start digging into the history of these photos, you see so much from other cultures that goes unacknowledged,” Shih said. Her work probes into how we can more intentionally represent other cultures, specifically Asian American, in still life art.

She’s a former food blogger, and her photos are luscious and inviting. You almost want to reach out and grab a donut or a piece of roast duck. We spoke to her about her work.

Tell me about your still lifes.

The Asian American still life series was one I started in fall of 2020. I had been thinking about it for a while. I come from the editorial still life photography world, and so many of our references are paintings by the Dutch masters. Still, even today. When you start digging into the history of these photos, you see so much from other cultures that goes unacknowledged. Vases from China, fruit and flowers from all over. These paintings were what they used to demonstrate the reach of Europe’s imperialistic power. But why do we think of them at first blush? So many other cultures have still life traditions.

This project started as an experiment. The references have always been there, and so I was curious about how seamlessly Asian American narratives fit into the tradition. One of the first pieces I made was with Mayly Tao, whose family runs a second-generation Cambodian American–owned donut shop (DK’s Donuts) in Los Angeles. Some people don’t see the donuts as Asian American, but there’s a decades-long history of Asian American–owned donut shops in California. In another collaboration, a friend put me in touch with Raina Lee, a ceramicist out of LA. We collaborated on this sunflowers piece, reflecting both on Van Gogh’s Asian art influences and our shared love for Taiwanese pastries. It’s been fun to learn about the people I get to work with. I don’t put out calls, but I do stalk people on Instagram a lot and ask friends [if they want to participate] or if they know people who would be a good fit.

What has the reaction been like from people who see the work?

One of the most rewarding parts is when I get to show this work and see how much people within the Asian American community see immediate recognition of their experiences in the work. I have a few pieces that on first glance look like traditional European still lifes, and people will immediately pick out the food or item that they recognize from their backgrounds. And I think that in the Asian American community there’s a really positive reaction to seeing themselves in the world and in this traditionally high-art space.

Outside of the Asian American community, it’s been really interesting. Most of the responses I’ve received are from outside of the Asian American community, given the makeup of the photo and art worlds in the US. Taking these to portfolio reviews and shows, you encounter more non-Asians. People will always tell me that the work is either “not Asian enough” or “it’s too Asian.” Some people look at it and see donuts and will say, “What’s Asian about this? Where’s the cabbage?” It just goes to show that there are long-held stereotypes and ideas that people have about Asian American representation.

People have also suggested working on Chinese-influenced art with Western elements, but I haven’t explored it yet. One of the things I’m working on in this current series is unveiling how much influence there is in the Western art world from Asia. Like Van Gogh — he was heavily inspired by Japanese woodblock printing, and it influenced the way he used perspective in what we now think of as his iconic style. This worked both ways. Asian artists would take European artifacts like watches and clocks and feature them in their still lifes, like in the 18th- and 19th-century Korean scholar scrolls.

There is an element of my work that questions what it means to be “all American.” The “Flower Brick” piece is made of Legos, which is a pretty universal experience for kids growing up in the US, no matter your heritage. Or the Halloween candy diptych. So much of what’s underlying when people tell me that this work isn’t “Asian enough” comes from not only the perception of what “Asian” should be but also the perception of what “American” should be, and I want to take some of that back with the work.

How did you get into photography in general?

My dad was an amateur photographer. He was always interested in it. We did a road trip every year, and he gave me his old half-frame camera, and that was really fun for learning the basics. My dad would always be giving me tips on landscape photography on our trips. So I’ve always been interested in taking pictures, but I didn’t get serious about it until I was in graduate school at Stanford. I was, to be honest, a little bored in my program during the first year and moonlighting as a wedding cake maker. People would ask for recipes, and I would take pictures of my cakes. So I fell into the food blogging world, and I discovered that the part that was really bringing me joy was photography.

What are your goals within the project?

Narrowly, I think there’s still a lot of stories to be told. I want to expand it, work with more people, and get their stories into images. If I had to dream really big, I would love to have an exhibition or some sort of conversation or space where this work could sit next to work from the old masters. There’s a piece that I made called “Flower Brick,” which has a big flower brick–shaped vase made out of Legos. The idea behind this piece was that in the Dutch Delftware tradition, they were obsessed with Chinese pottery. At some point, there were bans on exporting Chinese porcelain, and Europe had to learn to make their own blue-and-white porcelain. They would paint imaginary scenes of what they thought Chinese villages and people looked like on the sides of the porcelain vases; the Rijksmuseum has a really good collection of these on view online, which was also helpful for my own research in making this piece. A large goal is to have both of these things in context. Another goal is to help more people see themselves in this art that has for so long been exclusively European-dominated; it would be fun to break those barriers down, not only for us but also for how we all talk about art history. I feel like I’m still early in the project.

It’s funny to hear that the Dutch masters were doing this same thing that people struggle with now, fetishizing Asian things or processes. Do you feel like that comes up in your work at all?

I’m a linguist and cognitive scientist by training, and the research that I do is about categorization and language sounds. I’m ultimately interested in how people categorize things in the world around them. From a cognitive science perspective, I understand that as beings in the world, we necessarily have to categorize things — what’s a poisonous and not poisonous plant, for example — and so humans have evolved to be really good at doing so. That’s always going to be the case, even for us Asian Americans. We’re going to bring preconceived notions of people and places to our perceptions of the world. I think that what we all can do about it is recognize that categorization is something that naturally and inevitably happens. And if we recognize this, we can break out of our impulses and try to deconstruct those categories. For example, I call these “Asian American still lifes,” but “Asian American” is a monolithic term, and we’re not at all homogenous. I’ve struggled with how I can represent — or if I can even represent — Asian American stories in a shared way. I think that what would be great is if people want to break out of the fetishization of what they think Asian American art should look like: get to know the people making the work and the work itself, and accept it on its own terms, outside the preconceived categories that we’ve been using up till now.