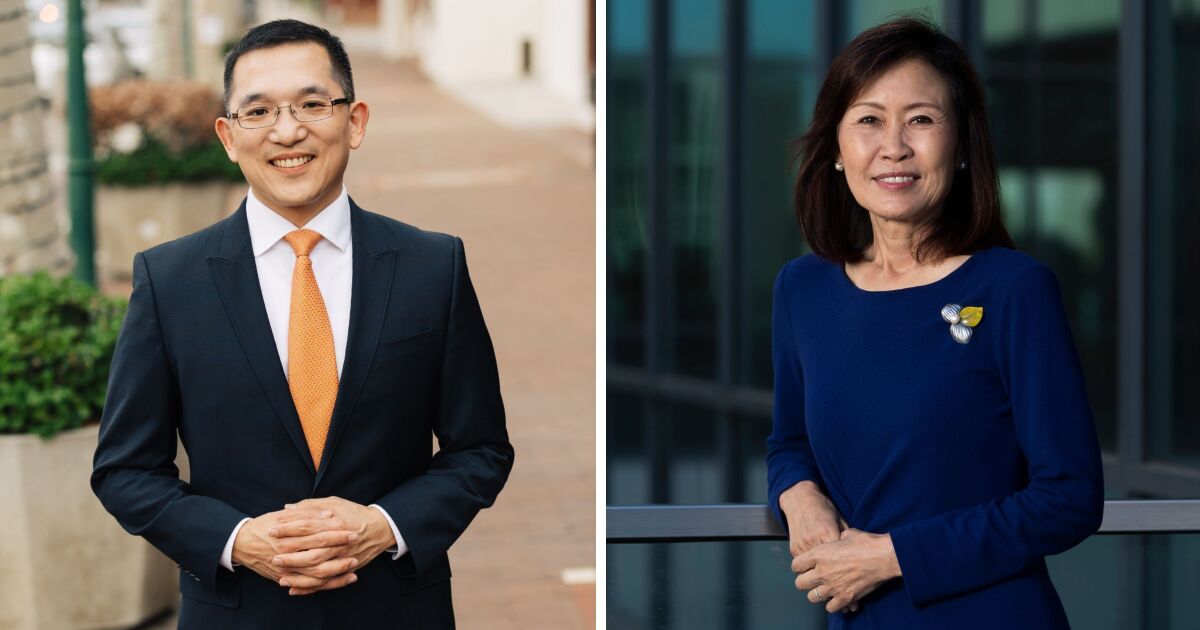 From left: Democrat Jay Chen and Republican Rep. Michelle Steel are battling for California’s 45th Congressional District, home to the largest Vietnamese community in the nation.

Little Saigon in Orange County, Calif., boasts the largest concentration of Vietnamese people outside Vietnam. Democrat and congressional hopeful Jay Chen showed up one day in September, dressed in his uniform from the U.S. Navy Reserves. He was there to visit the Museum of the Republic of Vietnam, a one-room collection of artifacts donated by veterans and refugees of the country’s civil war, tucked in the back corner of one of the shopping centers.

Quân Nguyễn, one of the founders of the museum, showed Chen around. A local reporter for a Vietnamese-language paper tagged along. “When politicians come by, they always bring their own newspaper people,” Nguyễn said.

Candidates come to such local highlights — and make a point of commemorating their visits in the press — because Vietnamese Americans make up the largest Asian American voting bloc in the area, a constituency that can swing an election. In the newly drawn congressional district of CA-45 that Chen is running in, they comprise 16% of all voters. Other key AAPI groups in the area include people of Korean, Chinese and Indian descent — together accounting for a third of all registered voters. Chen is Taiwanese American, and he is running against Republican incumbent and Korean American Michelle Steel. The election is a truly California affair: intersectional and immigrant, where race and political identity meet.

The fight for Orange County underscores the complexity of the Asian American vote. Demographics are not destiny here — both Republican and Democratic strategists can pull data suggesting an AAPI swing one way or the other. It has become one of the most closely watched congressional races this election cycle, and will likely trigger a rethink for politicos on how they’ve traditionally surveyed Asian Americans.

“We’re at a point now in our community where we can elevate two Asian Americans from both parties,” Chen said. “But I think we also have to look beyond that and recognize that it’s the issues that matter, and hopefully Asian Americans are at a point where we don’t vote just on a party or on an ethnicity, but we’re voting based on what these individuals would do for the community.”

Nationally, Asian Americans are one of the fastest-growing groups of the U.S. electorate, with record voter turnout in 2020. Experts say the voting bloc cares about the same domestic issues as other voters. But with overseas connections still strong for many, especially first-generation voters, U.S. foreign policy ends up playing an unusual role in Asian American voter choice, a phenomenon known as homeland politics.

The term describes how the political choices of immigrants are influenced by their attachments and concerns about their home country. The Museum of the Republic of Vietnam, for example, underscores the enduring ties people have to a place an ocean away, and suggests that current affairs in Asia remain a concern to many.

“China continues to be a key issue for Vietnamese American voters, particularly those concerned with nation-state or trade issues,” explained Long Bui, an international studies professor at UC Irvine who studies Asian American populations. In contemporary geopolitics, Vietnam resents China’s naval activities in waters it considers its own, and distrusts the growing power of the Chinese Communist Party.

Little data is available tracking Asian American sentiment in this way, and surveys often do not account for differences within diaspora groups. Polls, for instance, jumble those from Taiwan under the umbrella “Chinese American” category — which, given Beijing’s threats against Taipei and growing numbers of Taiwanese who reject that identity, fail to capture that group’s assessment of the rise of China — one that is markedly different from immigrants directly from the People’s Republic of China.

For many Americans who have fled authoritarian states, there is often a preference for the party they believe has a tougher approach to non-democratic states.

“The Vietnamese American community really pays attention to U.S. foreign policy towards Chinese Communist expansion in the Asia-Pacific region,” said Tri Ta, Republican mayor of Westminster, and supporter of the Steel campaign. “We are strongly anti-Communist.”

Two Asian American women from Orange County won those districts: Michelle Steel and Young Kim. For many years, Kim had served as the outreach director and head of Asia affairs for now-retired Congressman, Ed Royce, and became a fixture in the AAPI community. While voters care most about domestic issues, both also campaigned as anti-Communist hawks. In Congress, Steel sits on the Congressional Executive Commission on China, which monitors Chinese human rights violations, while Kim has introduced bills such as the DICTATOR Act, which calls for investigating China’s potential assistance to Russia in evading war sanctions.

Encouraged by their success and in a drive to appeal to more AAPI voters, the Republican National Committee (RNC) opened a field office in Little Saigon last year. It’s one of several across the country that the GOP has set up.

According to AAPIData, support for Democrats has dropped some 10 percentage points since 2020, though Asian Americans still lean Democrat. While the economy, education and crime are some of the group’s top concerns, a majority of those polled also said U.S. foreign policy and national security are “very important” or “extremely important” to them, and AAPI voters remain split over which party is doing a better job on those two issues.

“This group is up for grabs,” said Cliff Li, Executive Director of the National Committee of Asian American Republicans. But, he warned, “It’s so diversified you’ve got to do tons of homework to get to them.”

In CA-45, that means appealing to anti-Communist feelings among Vietnamese Americans. Wartime family histories also mean a common pro-military stance, which is where Chen and his service with the U.S. 7th Fleet could resonate.

“You have this Vietnamese community that’s very cognizant of China’s claims to the South China Sea, and just China’s overall menacing presence,” Chen said. “And for the Taiwanese Americans also, this is top of mind.”

At times, it feels as if the two candidates are working to outdo the other with their tough-on-China credentials — and to cast suspicion on the other.

Chen speaks at a veterans’ event for his campaign. A member of the U.S. Navy Reserves, he has been emphasizing his military credentials to more moderate and conservative Asian Americans — and how he cares about their homeland politics.

The CA-45 congressional campaign has become a bitter fight

Steel recently sent out mailers to voters in Little Saigon suggesting Chen is sympathetic to China and is a Communist — complete with a doctored photo of him holding The Communist Manifesto. The Steel campaign cites his vote from a decade ago while on a local school board to work with the Confucius Institute, a Chinese government language outreach program that has since come under scrutiny for its attempts at some locations to censor criticism of China’s human rights record.

Chen has hit back, pointing out that Steel voted against the CHIPS Act, a multi-billion dollar government investment to catapult America’s semiconductor industry, and a parry against China’s own ambitions.

Steel has only doubled down, recently airing an ad where two actors playing Chinese spies crow that Chen is “one of us.” The spot has received backlash from the Asian American community, including a rebuke from Committee of 100, which represents prominent Chinese Americans. Steel declined to be interviewed for this piece.

Both candidates must tread with care and consider each slice of the AAPI community. Chinese Americans, for example, have “a unique situation being sandwiched between two superpowers,” said Li of the National Committee of Asian American Republicans. Many want to see improved relations between the United States and China.

And for younger Asian Americans, “homeland politics” may not even play a role in their election decisions.

“There is an intergenerational dialogue happening now, where liberal ideas are on the rise but traditionalist ones have not yet been eclipsed,” said Bui at UC Irvine. This group cares about social issues such as abortion and anti-racism. That too, must enter the calculus for candidates hoping to win here.

Sunny Park, a Democrat and mayor of Buena Park in CA-45, sees a future where Democrats will gain in the once-conservative bastion where Richard Nixon was born and where Ronald Reagan kicked off his 1984 presidential reelection campaign. Actively mentoring future political leaders, Park said she’s “been working with other female political candidates in many other cities in Orange County.”

Until then, however, Orange County remains fluidly purple. For Chen, that means making that pitch to more moderate and conservative Asian Americans by emphasizing his military credentials — and how he cares about their homeland politics. “I have a top secret security clearance,” he said. “I’ve served on the Korean Peninsula.”