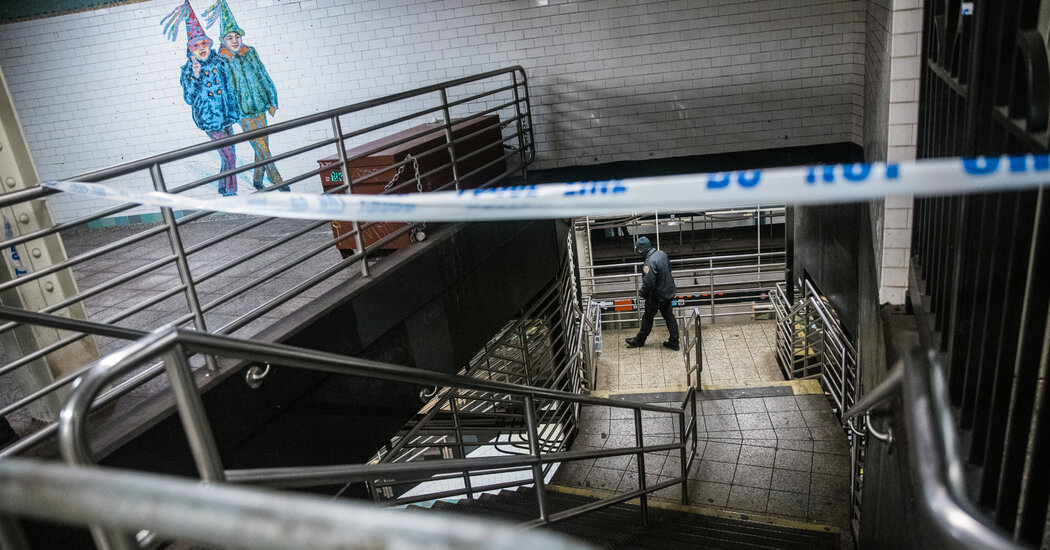 Michelle Alyssa Go loved New York City, and traveling. She had celebrated her 40th birthday in December with a vacation in the Maldives, a neighbor said, and looked forward to work-related business trips.

On Saturday morning, Ms. Go left her apartment on the Upper West Side and was about to step onto a subway in Times Square when a 61-year-old man pushed her from behind, the police said, shoving her to her death in front of a southbound R train.

Screams echoed through the station just after 9:30 a.m., a witness said, and the killing sent shock waves through a city already on edge nearly two years into a pandemic. Subway use is half what it was before March 2020, and riders who have pleaded for help from elected officials complain regularly about encounters with people who appear homeless and mentally ill.

In another, less virus-conscious year, Ms. Go’s zest for travel might have taken her away from New York over a three-day holiday weekend, Olivia Henderson, her next-door neighbor in a West 72nd Street building, said.

“She was incredibly smart,” Ms. Henderson said, choking back tears as she spoke on Sunday. “She was just the person who did everything right.”

Reserved but friendly, Ms. Go renewed her lease during the pandemic rather than leave, Ms. Henderson said, committed to the city she had considered home after completing a masters in business administration at New York University’s Stern School of Business.

“I guarantee you she was just doing something totally normal,” Ms. Henderson said, “and that’s why this is so traumatizing.”

Ms. Go earned an undergraduate degree from the University of California in Los Angeles and worked in mergers and acquisitions for Deloitte Consulting, according to her LinkedIn page.

A managing director at Deloitte, Jonathan Gandal, said the company was “doing all we can to support her family and friends during this terribly painful time.”

“We are shocked and deeply saddened,” he added, “by the loss of our colleague in this senseless act of violence.”

While working in finance, she had also volunteered for 10 years for the New York Junior League, coaching women and children on nutrition with a goal of stabilizing at-risk and homeless families, the league’s president, Dayna Barlow Cassidy, said in a statement. While on a committee that focused on empowering young adults and teenagers, Ms. Go prepared job candidates for interviews, helped fine-tune résumés and offered tips on personal finance.

After the attack, Simon Martial, who served two prison terms for robbing taxi drivers while threatening use of a gun, rode a train to Lower Manhattan, where he told officers at the Canal Street station that he had pushed a woman onto the tracks, the police said.

Mr. Martial, who the police said was homeless, was undergoing a psychiatric evaluation at Bellevue Hospital on Sunday, but he is expected to be arraigned on murder charges, law enforcement officials said.

Mr. Martial was previously found unfit to stand trial following a psychiatric evaluation in 2019, after he was charged with drug possession near Washington Square Park, prosecutors said. The case was dismissed because of his mental state, they said.

He had been under the supervision of state correction authorities until last August, as part of his sentence for a pair of holdups four years earlier, according to state prison records.

A spokesman for the Legal Aid Society, which represented him in a 2017 case, declined to comment Sunday about Mr. Martial, who the authorities said had been homeless since roughly 2004.

Just before the attack, Maria Coste-Weber, who lives near Hudson Yards, was standing on the Times Square subway platform, waiting for a train to take her to a boxing class. She said she saw a man moving quickly toward the tracks, arms outstretched.

“He started running with both of his hands in front of him, like, tackling,” Ms. Coste-Weber said. “But it was so fast, nobody realized what was going on before it was too late.”

Ms. Go was standing near a group of women, preparing to board the train as it pulled into the station.

“She had her back to this crazy person,” Ms. Coste-Weber said. “She never saw anything.”

Ms. Go was the second woman confronted by Mr. Martial in the station, the police said. Minutes before, another woman told the police that she had drawn away from Mr. Martial, fearful that he might push her to the tracks.

During the pandemic, bias crimes against Asian Americans have soared. While Ms. Go is of Asian descent, the police have said that there was no indication that she was targeted because of her ethnicity.

She had moved into her one-bedroom apartment a block from Central Park about 18 months ago, Ms. Henderson said, relocating from a nearby walk-up to an elevator building in part to make visits from her parents in California easier.

On the street where Ms. Go’s family lives in Fremont, Calif., in the East Bay area southeast of San Francisco, a steady stream of visitors arrived Sunday morning carrying food. A woman who answered the door to the split-level home requested privacy and declined to comment.

Neighbors said they were shocked and saddened by the news.

“That family is a very nice family,” said Jitesh Shah, 50, who lives across the street from the Gos.

Ms. Henderson and her husband placed a bouquet of hydrangeas and roses outside Ms. Go’s apartment door, wrapped in an off-white ribbon that was a favorite toy of their cat Mimi, a pet Ms. Go regularly volunteered to watch. The trio shared an outside terrace and had formed a strong bond during the pandemic.

“I’d go take the recycling down and be back an hour later after stopping to chat with Michelle,” Ms. Henderson said.

She became known in her apartment building for her wide, open smile and her generosity.

At Christmastime, she left a neighbor a large box of chocolates with a thoughtful note. When she was on Long Island for work, she volunteered to stop at a nearby Ikea to pick up items for Ms. Henderson.

“She was a very mild-mannered, gentle woman,” said Hannah Epstein, who lived down the hall from Ms. Go. “So friendly.”

Ms. Epstein, a lifelong New Yorker, said she once told Ms. Go that she knew the young woman was not from the city even before being told. “You’re too jolly,” Ms. Epstein recalled saying.

Cautious about contracting Covid-19, Ms. Go was mainly working remotely from home. But she rode the subway regularly to meet up with friends or to attend spin exercise classes in TriBeCa, at a studio where vaccinations were required and outdoor rooftop classes were offered, Ms. Henderson said.

In February 2021, after a man who lived in a homeless shelter stabbed four homeless people in and near subway stations, Mayor Bill de Blasio sent an extra 500 police officers to patrol the system. In May, amid another spate of attacks, Mr. de Blasio sent 250 more officers and said it would bring the number of police personnel patrolling the subway system to the highest level in the police transit bureau’s history.

After taking over as mayor earlier this month, Eric Adams, a former transit police officer, joined with New York’s governor, Kathy Hochul, to announce that police officers would conduct more frequent and regular sweeps of the subway system and work with homeless outreach teams to reassure current riders.

Transit officials have said that there were six officers assigned to the Times Square station on Saturday, including two who were on the southbound side when Ms. Go was pushed.

But ridership has also been much lower — it is still at less than half of prepandemic levels — and the rate of violent crimes per million weekday passengers has spiked almost across the board compared with 2019.

Ms. Cassidy, of the Junior League, said she hoped that Ms. Go’s death would force the city to address the “lack of mental health and other supports for underserved communities.”

In both instances, the drivers told the police that the thief had gotten into their cabs and put his hand inside his jacket and pointed it at them as if he had a gun.

“I’ve got a .38,” he told the second driver, according to the criminal complaint. “I just need a couple of bucks, so choose between life and death.”